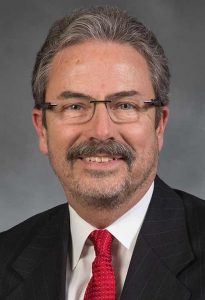 The meal will be catered by Country Girl Catering. Members of the Christian County Ag Group have gra- ciously donated Door Prizes for the event.

Mark Gebhards is execu- tive director of the Illinois Farm Bureau Governmental Affairs and Commodities Division. In this position, Gebhards supervises a staff that han- dles all lobbying and politi- cal action functions of the IFB at state, and national levels, and assists county Farm Bureaus in local gov- ernmental activities. He administers programs for all commodity activities of the IFB, including matters related to farm bill imple- mentation, biotechnology, trade, livestock, and other commodity issues. He also serves on President Guebert’s management team.

Raised on a grain and livestock farm near Springfield, Gebhards remains involved in agri- cultural production. He earned his bachelor’s degree in Administrative Science from Southern Illinois University, and his master’s from the University of Illinois.

Prior to joining IFB, Gebhards served as

He and his wife, Beth, have four children Shane, Grant, Logan, and Molly.

Editorial: A week’s paid leave? What took Illinois so long?

Editorial: Pritzker’s windmill flip will be a flop in much of Illinois