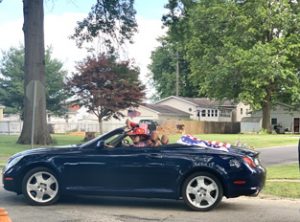 TAYLORVILLE — Ben Thompson, 2021 THS graduate, was met yesterday with a surprise drive-by parade of family and friends. The parade was led by Mayor Bruce Barry, Taylorville Police Chief Dwayne Wheeler and Sergeant Christian Nelson and wife Kirsten, who are like family. Thompson leaves tomorrow morning for the United States Airforce Academy in Colorado Springs, Colo. Thompson was nominated by Congressman Rodney Davis and was suc-cessful in obtaining an appointment. Thompson is the son of Steven and Jeana Lomprez.
Posted in Local News, Top Story