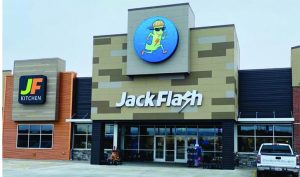 PANA — The Pana City Council approved a series of financial incentives on Monday night to bring the development of a Jack Flash Travel Center to downtown Pana. The development will cover an entire city block and will look some- what like their store, shown here, which is located in Altamont. Lisa Wortman, a spokesperson for Wortman Development, LLC, said the new facility will bring “A fresh, appealing look to Pana,” and will feature “Food and prod- ucts not currently found in Pana.” See story below.

PANA — The development of the $3.5 million Jack Flash Travel Center in downtown Pana got over a major financial hurdle on Monday night as members of the Pana City Council approved several financial packages aimed at helping the developers finance the project during their regu- lar meeting. Seven council members attended the meet- ing with Alderman Jeric Horsthemke absent which drew a room full of supporters for the project, mainly from the Pana Pride organization who were decked out in their bright yellow Pana Pride shirts.

Total price tag for the expan- sion and construction is listed at $5.6 million with $1.5 mil- lion for property acquisition; $400,000 for demolition of current city block; another $200,000 for utility work and relocation; and the expected $3.5 million to build the actu- al store. The store site will cover just over three acres of real estate in downtown Pana, bounded by First and Second streets to the north and south, respectively and on the east and west by Poplar and Locust streets, respectively.

Lisa Wortman was the spokesperson for Wortman Development Group, LLC. She said the project was conceived about four years ago, but was later dropped. Two years ago, members of Pana Pride con- tacted the organization and worked to revive the plan. They said their interest in Pana came from driving through the City of Roses on their way to another Jack Flash located in Farmersville. She said the company has 20 travel centers throughout cen- tral Illinois and two in Missouri.

“Our facility will have a fresh, appealing look,”

Wortman said. “It will be an upscale travel center and will have food and products other businesses in Pana don’t have.”

One of the stumbling points to moving forward is several of the property owners wanted more than the fair market value of their properties. The total was pegged at $900,000 by Wortman. She said without the support of the city with incentives to cover some of those costs, the project could not proceed.

Alderman Steve Scott listed figures the city has already spent on the block area of ground. It came to $235,000 for demolition and clean up of the fire ravaged portion of buildings along Second St. Of that amount, $27,000 was spend to purchase the McAfee Insurance building on Locust St. and demolition of it and a second dilapidated building next to it. Brunner Auto Supply/True Value Hardware is planning to relocate on the site. Also planing to relocate are Sav-Mor Pharmacy and Dagen Auto Service.

Mayor Nathan Pastor acknowledged the amount spend but stated, “Wouldn’t you have had to spend the money to tear those buildings down?”, which brought applause from the audience.

“I’m excited you’re coming,” Fourth Ward Alderman Kent Sims said. “We are ready for a change. Thank you for coming to Pana.”

Timing is also critical, according to Wortman. She said all 27 properties involved – except the Moose Lodge which was purchased earlier by another person – were ready for purchase, but there was a July deadline to secur- ing all of the properties. Wortman said they didn’t want to take the chance of losing the sales, so passage of the

package of three ordinances was essential Monday night. Under the agreements, the

city will rebate 1% of sales tax money the business brings in over the course of 15 years to reimburse the organization for the higher than expected property acquisitions. They will also have their property taxes capped at $50,000 for the first 10 years of the agree- ment through the TIF pro- gram, then $60,000 for the remaining five years. The cap was set at $920,000.

The city is also scheduled to receive a $200,000 for the Illinois Department of Community Economic Opportunity for the demoli- tion work.

Keith Moran of Moran Economic Development Co. of Edwardsville, had pre- pared an economic develop- ment survey of what finan- cial benefits the new busi- ness would bring to Pana. He arrived later in the meet- ing due to a conflict with another meeting he had to attend. He said none of the figures had changed since he worked them out previ- ously. He estimated the yearly annual revenues is slightly more than $127,000. He also pointed out, with the relocation of three other businesses, the city could expect to see higher sales tax, Business District Tax and TIF tax money in the process.

“The city won’t be losing any revenue since we are dealing with money the city doesn’t currently have com- ing in,” Moran said.

When the vote came on each proposal, all three passed unanimously and become effective immediate- ly.

Wortman expected to have the purchase agreements of the properties close by mid- August and demolition could start later in the fall. Actual construction of the facility is expected to begin in the Spring, 2022.