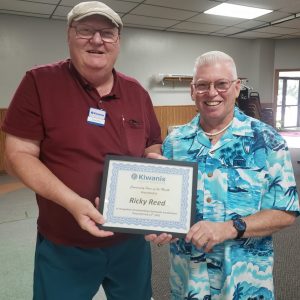 AYLORVILLE — Ricky Reed of Taylorville (right) was presented the first “Hero of the Month” award from Kiwanis member Dean Ray (left) on behalf of the club. Ray nominated Reed for his involvement in the American Legion as chaplain, service officer, and visitor to many veterans. 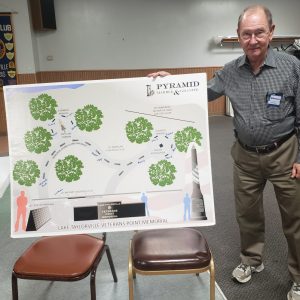 Doctor Ron Mizer, a Kiwanis member and member of the Downtown Taylorville Committee, told Kiwanis Club members about he and the committee’s efforts to build the Lake Taylorville Veterans Point Memorial. 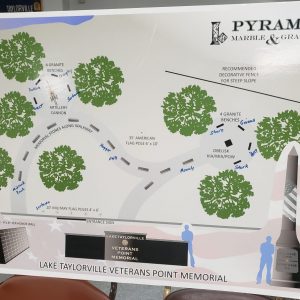 The Taylorville Kiwanis Club was shown the layout of the proposed Lake Taylorville Veterans Point Memorial, at its Tuesday meeting. Submitted Photo

Ricky Reed of Taylorville was presented the first “Hero of the Month” award from Kiwanis member Dean Ray on behalf of the club. Ray nominated Reed for his involvement

Doctor Ron Mizer, a Kiwanis member and member of the Downtown Taylorville Committee, told Kiwanis Club members about he and the committee’s efforts to build this memorial honoring those who died and served in the Armed Forces.

Mizer said the committee is working with Pyramid Marble and Granite of Effingham on the design and construc- tion. The memorial will include a 40-foot monument, 12 memorial honor walls, a walkway, a 35-foot American flag pole, 20-foot military flag poles, and numerous benches along the walkway.

A World War I cannon formerly located at the Christian County Historical Society, is being refurbished and will also be permanently installed at the memorial.

Mizer said the total cost of the project is some 300-thousand dollars, with sponsorships from businesses and individuals being accepted. The 12 memorial honor walls can have an inscription added for as little as 125-dollars. Forms are available from the Downtown Taylorville organization office at 824-3555.

Mizer especially credited the City of Taylorville and city engineers Benton and Associates, among those who have provided help to make the memorial happen.

The public is reminded that the Kiwanis Club is holding its Drive-Thru Donation Days on Saturdays thru the rest of July from 9am to 1pm, in the Miller Media Group front parking lot at 918 East Park. Non- perishable food and monetary donations received will be given to the Taylorville Food Pantry.

The Taylorville Kiwanis Club is part of global organization of volunteers dedicated to improving the world one child and one community at a time. Weekly meetings are held Tuesdays at noon at the Taylorville Moose Lodge. For information on the club, go to taylorvilleki- wanis.com.

Editorial: A week’s paid leave? What took Illinois so long?

Editorial: Pritzker’s windmill flip will be a flop in much of Illinois