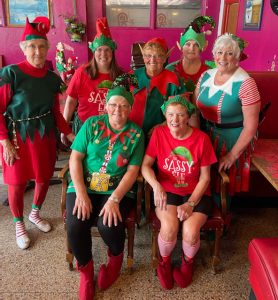 PANA — Pana Red Roses Red Hat Club met at Tres Compadres Restaurant just outside of Pana for their “Christmas in July” party since we were not having meetings last December. Elf attire was encouraged and the committee did a wonderful job for us to have our Christmas party.

Pictured are, from left, front row, Judy Glick and Diane Mason. In back, June Miller, Irene Muneses,Carol Poe, Karin Grimes and Becky Miller were our hostesses for the day.

There were eight door prizes distributed. Bingo games were played with Elf ornaments as prizes and each person went home with an Elf ornament that were brought to be exchanged by the members. Carol Poe made an elf ornament for each member and Judy Glick decorated Elf cookies for everyone. We had a brief meeting while our efficient waitress took our orders from the delicious menu.

Next outing will be to Decatur to the Mueller Museum on Wednesday, August 18th at 10:00 AM. There will be a fee for the 45 minute tour of $1.00 or 2, depending on the size of our group that day. We are to gather at the Methodist upper parking lot and leave at 9:00 AM. After our tour, Hostess Rosemary Horsthemke has aranged for lunch at the East End Grill located at the air- port comencing at around 11:00 AM. Please make your reservations to Rosemary by August 11th at 217-823- 0302.