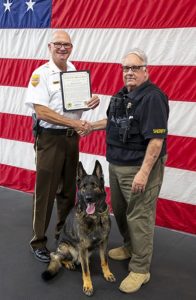 TAYLORVILLE — Christian County Sheriff Bruce Kettelkamp gave tribute to the recent life-saving actions of his Undersheriff, Howard Buffett. Kettelkamp explained that, while on a humanitarian mission earlier this month along the U.S./Mexico border, Buffett encountered a 27-year-old woman who was found unresponsive due to the extreme heat of the remote desert location. Buffett and a retired law enforcement officer immediately rendered aid and were able to stabi- lize her until she could be airlifted to Yuma Regional Medical Center. Buffett was recently recognized by the Yuma Arizona Sheriff’s Office with a Life-Saving Award for his conduct. “Our officers assist our community every day without expectation of recognition,” Sheriff Kettelkamp noted, “however, it is nice to see when an officer is acknowledged.”

“Undersheriff Buffett’s decisive actions and selfless acts while assisting in preserving the life of Ms. Diaz are a credit to himself and the Christian County Sheriff’s Office,” said Yuma County Sheriff Leon Wilmot.

“Good public safety never takes a rest, and I am proud of all of the men and women of the Christian County Sheriff’s Office who, like Mr. Buffett, no matter the place or time, are ready to be there to help others,” Kettelkamp explained.

The woman, who had traveled over 2,000 miles from her home in Chiapas, Mexico, with her younger broth- er, collapsed ten miles north of the U.S./Mexico border along the foothills of the Tinas Atlas Mountains after suffering from heat stroke and dehydration. She was unconscious and in distress at the time of her discov- ery. Life-saving measures were immediately adminis- tered, and she was airlifted by the Border Patrol Search, Trauma and Rescue team.