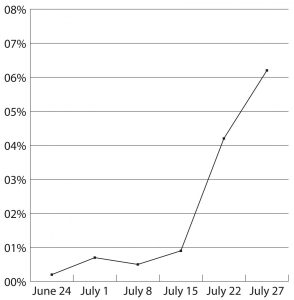 CHRISTIAN COUNTY — As COVID-19 cases rise through- out the world, Christian County is not immune from the trend. In a 30-day period, since June 24, 2021, the posi- tivity rate in Christian County has gone up six percent from .2% to 6.2%. Most experts agree the rise is due to the number of unvaccinated people and the introduction of the Delta variant into the area.

“I believe (the rise) is cause for concern,” said Travis VanderMeersch, Infection Prevention and Quality Coordinator for Taylorville Memorial Hospital. “I suspect that the cause may be a combination of public mitigation measures being relaxed, along with the fact that a significant portion of the county’s population has not been vaccinated, and the variants of concern (Delta) becoming more wide- spread in our communities.”

“We’re monitoring the situa- tion very carefully,” she said. “We have seen an increase in the positivity rate for the COVID testing we are doing here, so it doesn’t surprise us to see that increase in the county. Our county has a very low vaccine rate. So, this is to be expected.”

The Breeze-Courier reached out to Greg Seiders, Director of the Christian County Health Department, on several occasions for this article but the calls were not returned.

wearing protocols to recommend vaccinated people to again wear a mask when they entered a crowded situation. They are also recommending school students and university students wear masks when they attend classes this fall.

The Illinois Department of Public Health announced it will adopt the CDC guidance after Gov. JB Pritzker had said he would review it during a news conference Tuesday afternoon.

Prior to Tuesday, Illinois had been following CDC guidance of the past two months which said unvaccinated indi- viduals should wear masks indoors, but those who were vaccinated needed them only in certain settings, such as doctor’s offices and public transportation.
The Illinois State Board of Education had recently fully adopted CDC guidance as well, which strongly encouraged but did not mandate masks in schools.

But the Illinois Department of Public Health issued a news release later Tuesday saying it “is fully adopting” CDC masking guidelines, including recommendation for schools.

“While data continues to show the effectiveness of the three COVID-19 vaccines currently authorized in the U.S., including against the Delta variant, we are still seeing the virus rapidly spread among the unvaccinated,” IDPH Director Dr. Ngozi Ezike said in a news release. “Cases and hospitalizations due to COVID-19 both continue to increase, overwhelmingly among the unvaccinated, but the risk is greater for everyone if we do not stop the ongoing spread of the virus and the Delta variant. We know masking can help prevent transmission of COVID-19 and its variants. Until more people are vaccinated, we join CDC in recommending everyone, regardless of vaccination status, wear a mask indoors in areas of substantial and high transmissions, and in K-12 schools.”

As the school year is about to begin, at least three school districts – Edinburg, South Fork and Pana – have decided not to wear masks while in the classroom. On Wednesday, Pana School Superintendent Jason Bauer said he is reviewing the new IDPH recommendations sent out late Tuesday. He said there was a possibility more recommendations could be coming shortly. However, he didn’t feel the Pana protocols would change.

“As long as local school districts have local control I do not see this Board changing course,” he said.

South Fork Superintendent Chris Clark is on vacation, but Administrative Assistant Krystal Mulvaney said, “I’m not really sure where it’s going to go.”

There was no response from the Edinburg superintendent.

Casner said Pana hospital had one COVID patient who was admitted within the last five days. She said this was the first person hospitalized, “In a very long time.” The hospital never relaxed its mask wearing protocols and is still requiring masks for everyone (staff and public) inside the building at all times, “Except when vaccinated staff are involved in a small meeting.”

She urges the public to become vaccinated to the disease.

“Do the research, get the information from their trusted provider – not necessarily from national media – about whether or not to get vaccinated. Talk to a provider the trust be it their primary care doctor or a specialist they’re seeing and strongly consider getting vaccinated,” Casner said. “The one statistic that speaks volumes to me is that close to 95% of the new COVID case are in unvacci- nated people. This shows the success of the vaccine and how well the vaccine protects you from the virus.”

In addition to getting vaccinated, VanderMeersch added some steps the public can take to help bring the positivi- ty rate down. They include: Practice appropriate social distancing, and consider wearing a mask when in contact with large groups of people and if you are sick with COVID-19 or just sick in general, wash your hands frequently, and distance yourself from others until you are well again.

The 169 intensive care unit beds in use by COVID-19 patients as of Monday night were the most since June 13. From Monday to Sunday, there were 136 ICU beds in use on average, an increase of about 36 percent from the week prior.

According to the IDPH, just over half of the state’s popula- tion, or more than 6.4 million individuals, are fully vaccinated. Over the past seven days, 17,776 vaccines were administered each day on average, representing a declining vacci- nation pace.

The case positivity rate was also on the rise Tuesday, reaching 3.7 percent, a high since April 22 as testing numbers continued to taper off. There were 1,669 confirmed or probable cases of the virus reported Tuesday among 31,019 test results reported.

Positivity rates were higher in southern Illinois, with Region 4, which covers the Metro East area on the Missouri border near St. Louis, seeing a rate of 9.2 percent as of the latest data Tuesday, and southern Illinois’ Region 5 at 8.5 percent. All other regions were on an increasing pace as well. Over the past three days, the pandemic claimed another 10 lives, bringing the con- firmed death toll to 23,414 along with 2,472 probable deaths.

Focus on the future to feature presentation on resiliency/self-care 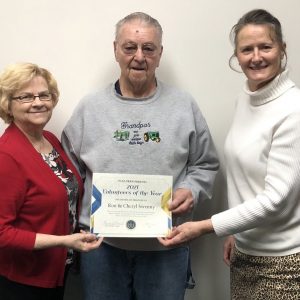 Swenny’s named 2021 Volunteers of the Year 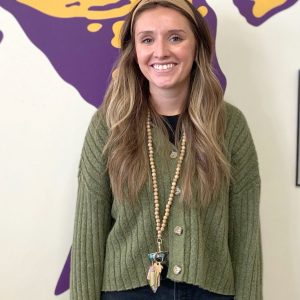