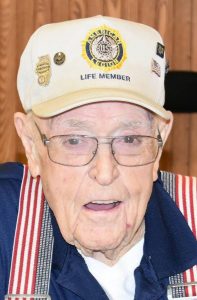 He was born August 1, 1927, in Kincaid, Illinois, the son of William T. and Helen E. Neu Hughes. He was affiliated with the Midland United Methodist Church, Kincaid. Bill was also a member of the Blueville Masonic Lodge in Edinburg, Ill.

Bill quit high school his freshman year to work for the railroad when steam engines were in this area. He joined the Navy a year later when he was 17 years old. He served in the Navy and the Naval Reserve from 1944 to 1954. When Bill was 83 years old he proudly earned his high school diploma. Bill was married to Barbara Branyan for 18 years and subse- quently divorced. Bill was a truck driver for over 40 years. He even hauled steel to St. Louis for the construction of the Gateway Arch. Bill was very community oriented and active in the American Legion Post #905. He served as Commander for numerous years and had been a member of the American Legion for more than 50 years. Bill was affectionately known as Papa Bill to Dylan and Shane Eggimann.

He was preceded in death by his parents and his brother Harold Dean Hughes.

Visitation will be held from 10:00a.m. to 11:00a.m. on Monday, August 2, in Masterson Funeral Home, Kincaid, Ill. Funeral services will be at 11:00a.m. with Rev. Chad Foster officiating. Burial will take place with Military Honors at 12 noon at Camp Butler National Cemetery in Springfield, Ill.

Memorial contributions may be made to the American Legion Post #905, Kincaid, Ill. or Midland United Methodist Church, Kincaid, Ill.