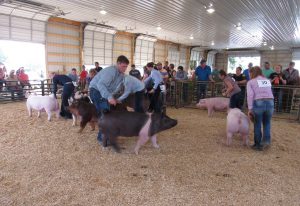 TAYLORVILLE – Shown here are contestants who took part in the 4-H Swine shown on Wednesday, July 21, 2021 at the Christian County Fair grounds. Along with the swine show, there were also 4-H shows for sheep and beef as well. Submitted Photo

University of Illinois Extension provides equal opportunities in programs and employment. If you need a reasonable accommodation to participate in programming, contact 217- 287-7246. Early requests are strongly encouraged to allow sufficient time for meeting participant needs.