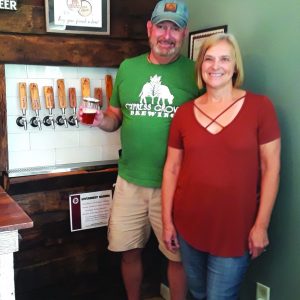 ASSUMPTION — Phil and Carolyn Corzine welcome visitors to Cypress Farms Brewing and Cypress Grove Farm Shop. They are located on 2400E Rd., about 2 miles northwest of Assumption. The shop is open from 11:00 a.m. until 8:00 p.m. on Saturdays. The tap room features 10 taps with nine beers brewed on site by Phil and one tap for a hard seltzer. They also sell frozen meats, featuring their own grass fed Belted Galloway cattle. Tom Latinos/Breeze Courier Photo 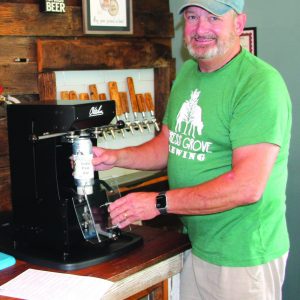 ASSUMPTION — In order to serve customers canned varieties of their beers, the Corzines can their beer in what are called 16-ounce Crowlers (cans). However, the process is completely done by hand and then a label is attached. Customers can enjoy the canned product on site or it is also available for carryout. 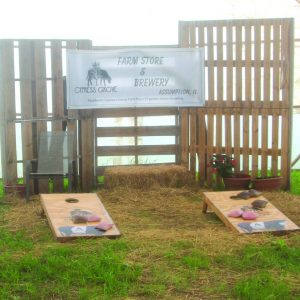 ASSUMPTION — Once you have a cold one in your hand, there are various places to sit, relax and enjoy your beer. A sun screen keeps out the harsh rays of the sun and allows for a nice breeze to flow through the structure. As colder weather approaches, the sides of the building can be let down and patio heaters allows customers to enjoy the countryside. There is also seating in the tap room and brewing room and for those who enjoy the fresh air, there are seats outside the tap room/shop.

ASSUMPTION — When you travel the country roads of Christian County during the summer, the rows of corn, soybeans and fields of cattle go on for as far as the eye can see. But where 1400N and 2400E intersect, about two miles northwest of Assumption, there comes the unexpected. Not unlike running into the Field of Dreams – “If you build it, they will come” to paraphrase the voice – the white letters affixed to the rustic fence announce you have reached Cypress Grove Farm.

It’s no ordinary farm, though. Sure you’ll see cattle and row crops, but smack dab in the middle of the property is Phil and Carolyn Corzine’s Cypress Grove Brewing and Farm Shop. Open for almost two years, the taproom is home to nine beers and a hard seltzer, all recipes developed by Phil over the years. You can also find canned beer of the prod- ucts which are not featured on the taps. And for those who not into the beer scene, they also stock hard ciders. In addition, the store fea- tures beef grown on the farm from the Corzine’s grass fed Belted Galloway cattle. They are a heritage breed from Scotland. The Corzine’s will also stock pork products featuring from local breeders.

Phil started out in the farming business with his father in 1979. He currently manages about 200 acres of family farm land. He ultimately became involved with the MAPPING (Management and Planning Programs Involving Nonmetropolitan Groups) program through Western Illinois University in Macomb when the village of Assumption subscribed to the program. Out of this came the 1905 Brewery. Phil became responsible for brew- ing the beers which were served to the public. The five couples who made up the backbone of 1905 opened Memorial Day weekend in 2018. But on Feb. 28, 2019, a devastating fire destroyed the business.

Three of the couples wanted to rebuild and one couple wanted out. Phil and Carolyn felt that was enough to get the business back up and running.

“We knew we didn’t need to stay to make Assumption have the brewery, so we came out here and started this in November (2019),” Phil said.

The existing building which housed the meat business was remodeled and became the tap room for customer seating. There is a limited space in the brewing area for some seating and just outside from the brew house is a covered tent-like structure with tables and chairs. If the weather is nice, they roll up the side curtains and open each end to allow for air flow. When the weather cools, the area has patio heaters to ward off the chill. Music is also featured on some Saturdays and there is enough room two sets of cornhole goals for those wanting to throw.

And then, there is a seating area outside the front door of the tap room.

“We’ve had people go out and take their chairs up beside the fence where a cow and calf might be standing and just sit there was watch them,” Corzine said.

“While everything was shut down (due to COVID), we sold a ton of carryout,” said Phil. “We do 16 ounce growlers (canned beer) that is basically hand canning.

We kind of do it the same way they do it in a canning line, but it’s all by hand. So it takes a little bit. Like today, we did 20 cans. We try to a few cans of most of our beers so people can take a can or a four-pack or a 12- pack home with them.”

Corzine said since the farm store is only opened for a limited time (Saturday’s from 11:00 a.m. until 8:00 p.m. for summer) and their plan has always been to sell about 30% to 40% of our beer out the door, carry-out. And it appears to be work- ing.

The most popular of the beers served is a blonde ale called “Brew Skies.”

“It’s an ‘entry beer’ so a non-craft drinker will drink it because it tastes closest to a commercial beer, like a Budweiser, Bud Light or whatever, but, of course, I think ours tastes better,” he said.

Each week they try to have a new beer for customers to try. This weekend, the offer- ing was a blueberry infused soured pale ale. Corzine said it was a popular infusion, so his batch would be eight or nine gallons. Some batches he will brew as little as five gallons, all the way to 10 or 15 gallons. If the blueberry doesn’t sell out this weekend – or any of the other new brews – they will be rotated to another tap and some of it will be canned.

As the seasons progress, Corzine has to be thinking about the next type of beer he is going to brew.

“We’re in the summer mode right now and we’re already thinking about the next phase,” he said. “In brewing time, your not very far away from Fall and in Fall, we trend toward darker beers. Right now we try to keep everything lighter and then we’ll go to darker beer in September.”

Corzine said it takes two weeks to brew an ale to serve his customers. “If you brew a lager, that’s about a six week process.”

He utilizes two large fermenters and one smaller one in his process. The smaller one is for the “sours” and hoppie beers. Corzine said in brewing a beer, there is a lot of art that goes into it.

“There’s a science to it but then there is a of art to it and I’m more on the creative side and I tend to like to make a lot of new beers, kind of tweak the recipes,” said Corzine. “I brew really for flavor. I tend to favor the malt side.”

The Corzine’s host generally anywhere from 50 to 100 people each Saturday. They have a variety of food trucks which have come in on the weekends. People from Assumption, Taylorville,

Pana, Shelbyville and in about a 50-mile radius. Couples from Chicago, St. Louis and a regular group from Jacksonville.

They are also able to distribute their own beer by the keg which they have recently started. Some of their beer is being served in Utica and Maple Park, Ill., and people have come from those regions to check out the tap room.
“The people from farther away tend to look at out Facebook page to see what food truck is, what the beer is, before they decide to come,” Carolyn said. “We also do tag-a-brew, which is very poplar in Michigan. Two weeks in a row we’ve had people from Michigan in to get a tag-a-brew.”

A tag-a-brew is a small copper tag, about like a dog tag, which craft beer people collect and form a necklace. Some of the locations have a charm on them. For Cypress Grove, the charm is a cow.

The farm will be hosting its second annual BeltieFest on Oct. 9, from 11:00 a.m. until 6:00 p.m. The Octoberfest atmosphere will feature Bricks Exquisite Eats who will be serving up a huge German lunch. There will be vendors and baked goods available for sale out in front of the tap room.

Corzine invites everyone to come and visit Cypress Grove Farm and enjoy the laid-back atmosphere and the fine beers.

“There is really a unique vibe here,” he said. “Breweries kind of have their own vibe, an atmosphere. A lot of times people will sit down with people they don’t know and they start talking and sometimes find out they were born in the same town. They become friends and acquaintances. It’s just really cool.” 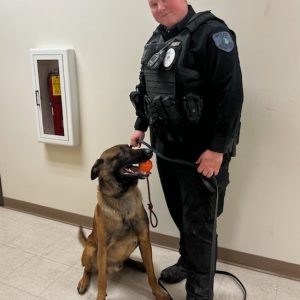