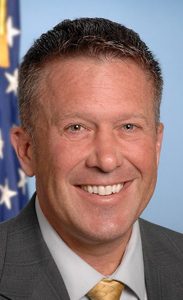 SAC Cox has led the Springfield Division since July of 2014 overseeing and leading the division through several high-profile investigations and operations. By way of example, during his tenure in Springfield Mr. Cox oversaw the first-of-its-kind federal investigation in the Central District of Illinois resulting in the arrest and conviction of Brendt Christensen who abducted and murdered a visiting Chinese scholar in 2017. Other cases of note include the arrest of a mathematics professor and researcher at Southern Illinois University- Carbondale on charges of receiving support from an arm of the Chinese government while applying for U.S. grants; the arrest of four individuals who formed a militia group intent on using violence to pro- mote their ideology; and the dismantling of a massive dog fighting ring in the Quad Cities area resulting in the seizure of 64 dogs and multiple arrests. Under the leadership of SAC Cox, the Springfield Division made over 300 arrests of perpetrators of crimes against children.

“SAC Sean Cox has dedicated his career with the FBI to protecting us all and is a true public servant,” said Acting U.S. Attorney for the Central District of Illinois Douglas J. Quivey. “His leadership of the Springfield Field Office set the standard and he acted as a mentor to many. His retirement is much deserved, and he will be missed.”

Steven D. Weinhoeft, U.S. Attorney for the Southern District of Illinois said, “FBI Special Agent in Charge Sean Cox has been a trusted and valued part of federal law enforcement for 22 years. His leadership and friendship has solidified a bond between the FBI and the U.S. Attorney’s office. This close working relationship has served the public well, as our offices have partnered to combat violent crime, child exploitation, and large- scale drug conspiracies while also protecting national security. We thank Sean for his service and wish him well.”

SAC Cox served as the On- Scene Commander during times of crisis, including a protracted fugitive manhunt alongside his counterparts from the Illinois State Police for Dracy “Clint” Pendleton after the suspect wounded an Illinois police officer in a shootout, utilizing FBI national level assets including the Hostage Rescue Team and SWAT from several field offices; a work-place active-shooter event in the Bunn Springfield distribution facility; through civil unrest and rioting in 2020; during numerous high-risk operations involving the use of SWAT; during an unprecedented government-wide shutdown when employees stopped taking home pay; and throughout the COVID- 19 global pandemic, all while maintaining morale and a 100% readiness posture to serve the American people and the constituents of the 84 counties in Illinois for which the Springfield Division and SAC Cox were responsible.

“SAC Cox has been a steadfast partner with the Illinois State Police over his many years of outstanding service here in Illinois,” said ISP Director Brendan Kelly. “From fighting public corruption to our joint efforts against violent crime, Sean is a friend to the ISP that will be sorely missed.”

“I have worked with SAC Cox for many years. Sean has not only been a dedicated leader at the FBI but has proven a tireless ally to law enforcement partners wherever he went. When asked for help, Sean’s unfailing response was ‘Yes, what do you need?’ We could always rely on Sean’s steadfast support. I will not only sincerely miss him as a law enforcement ally, but will also dearly miss him as a friend,” said Leo Schmitz, Cook County Sheriff’s Chief of Public Safety and former ISP Director.

SAC Cox made it a priority to work with communities and identify ways to improve relations with law enforcement. By way of example, he recognized tensions between law enforcement and the communities they served, particularly during traffic stops. Engaging the Illinois Association of Chiefs of Police, the Illinois Sheriff’s Association, Illinois State Police and the Illinois Principal’s Association, SAC Cox was instrumental in creating a driver’s education video whose goal was to strengthen relations between law enforcement and their communities. The video teaches young drivers how to conduct themselves during a traffic stop and under- stand their rights as provided under the Constitution and state law. Created in 2016, the production continues to be shown in driver’s education classrooms throughout Illinois.

Chief Kenny Winslow of the Springfield Police Department adds, “It has been an honor to get to know and serve with SAC Cox. He is a consummate professional that is always willing to lend a helping hand and assist in any way needed. His ‘how can we help attitude’, open communication, and willingness to provide resources has helped us carry out our mis- sion. I thank him for his dedicated service to our country, community and wish him the best of luck in his future endeavors.”

“Throughout SAC Cox’s career as a public servant in the FBI, he demonstrated the highest level of decisive leadership in both national security and criminal matters. Mr. Cox has a unique ability to direct national and international operations to mitigate threats, leveraging relationships and cooperation among local law enforcement, US intelligence agencies and foreign intelligence services. Sean’s tenure in the FBI has been one of outstanding service and distinction,” said Randy Coleman, Caterpillar Chief Security Officer and Retired FBI Senior Executive.

Flex-N-Gate Director of Global Security Operations Christopher Evangelisti said, “SAC Cox truly encapsulates what it takes to protect and defend the United States of America; his vast vision, his commitment to the mission and his tremendous insight have shielded this great nation from those that wished her harm.”

“I had the distinct pleas- ure of working closely with SAC Cox on cyber intrusion risks and threats, economic espionage, and insider threats. He and his team’s professionalism, commitment and dedication led to a successful conclusion in those cases,” said Jeff Larner, CEO-Larner
Security Risk Solutions, and former CSO-Global Security, ADM. “SAC Cox’s direct leadership with the FBI’s Business Working Group in Springfield was instrumental in collaborative relationship building with private sector companies.”

“SAC Cox has been instrumental in fostering a strong public-private sector rela- tionship with companies in his office’s jurisdiction, including State Farm,” said Jesse Magenheimer, Vice President and Chief Information Security Officer at State Farm. “We’ve appre- ciated his commitment to that relationship and wish him all the best in his retire- ment.”

Deere & Company’s Director of Enterprise Security and Preparedness, Larry Ford adds, “Special Agent in Charge Cox leads by example and has consistently championed the valuable partnerships between law enforcement, the public and companies like John Deere. Thanks to his direction, FBI Springfield Division has established relationships and fostered critical information sharing among those partners – benefitting the safety and security of us all. On a personal level, I’ve deeply appreciated SAC Cox’s commitment to ensure partners’ inquiries were always quickly and efficiently addressed, and believe it exemplifies his commitment to service. He will be missed.”

SAC Cox has been a driving force behind the success of FBI Springfield’s Citizens Academy. The nine-week program offered annually, gives business, religious, civic, and community leaders an inside look at the FBI.

“In life we are shaped by our experiences both good and bad. Each of us is presented with varying paths to walk. If we stay true to our- selves, life will present opportunities filled with greater adventures than we could dare to dream. From the time I was young to the day I sat in my kitchen filling out an application to be an FBI Special Agent, I felt a calling to live a life of service to others and make a positive impact. Fast for- ward 22 years and I am humbled to have had the opportunity to serve my country as an FBI Agent. My success and passion for my career would not have been possible without the support of my wife Janet and our children Kerissa, Alexander, and Zachary. Having been a Special Agent in the FBI is a dream come true for me. As I set out to write the next chapter in this great book called life, the qualities, the very essence that embody what it means to be an Agent: Fidelity, Bravery and Integrity, will always be a part of who I am at my core. Although I will no longer wake each day placing my badge on my belt, a gun at my side, and my credentials in my suit coat pocket, the essence of a Special Agent of the FBI, as it has always been for so many who came before, will continue to be forever etched into my soul.” SAC Sean M. Cox Details regarding a permanent replacement for the position of special agent in charge will be forthcoming.