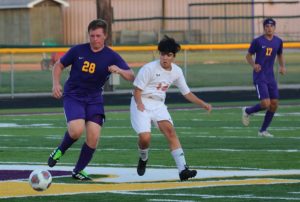 TAYLORVILLE — Passing the ball up-field is junior Cole Paulek, number 28, with teammate Casey Stickel, number 17, defending Taylorville’s goal. The Tornadoes came up short in the contest with the Hillsboro Hiltoppers, 3-0, in a game played Wednesday evening at Taylorville High School.

TAYLORVILLE — The Taylorville High School soccer team took on the Hillboro Hilltoppers Wednesday afternoon, ick- ing off the fall season at Tornado Alley. The game was delayed several hours due to the high heat and humidity. But, the Tornadoes failed to break into the scoring column and were delivered a 3-0 loss.

Midway through the first half, Hillsboro said “Hello” with the first goal of the game. Senior Gavin Matoush got credit for the score and it was 1-0, Hiltoppers.

Hillsboro scored again in the first half on a penalty kick from senior Devin Speiser to make it a 2-0 contest.

Taylorville had great communication but could not seem to find the spark they were looking for in the remainder of the half and they trailed, 2-0.

Both teams were looking to make things happen in the second half, but both teams used great defensive play to keep the other at bay.

Needing a different approach quickly, Taylorville began to play more aggressive. That opens it up for Hunter Fry to take the ball down towards the goal. The senior got the shot away, however, it was saved by the keeper for the Toppers.

Hilsboro would score one more goal to make the final, 3-0.

The coaching staff can spy improvement as everyone on the Tornado soccer team settles into their role.

The Tornadoes, winless in two matches, look to turn things around when the host arch rival Pana in the “Battle for Route 29.” Kick-off is at 4:30 p.m.

US knocked out of World Cup, loses to the Netherlands 3-1