CHICAGO (AP) — Yasmani Grandal has some work to do when it comes to having enough energy for his catch- ing duties after being side- lined by a knee injury.

Grandal homered twice and drove in eight runs in his return from the injured list, and the Chicago White Sox beat the sloppy Chicago Cubs 17-13 on Friday night.

The eight RBIs for Grandal matched the franchise record and career best for the switch-hitter. He also doubled and singled.

“I felt pretty tired halfway through the game after run- ning around, blocking, mov- ing behind the plate, but it just comes with the job,” he said. “Thank God that I’m back and I have a month of games to be able to get my stamina up and be able to feel good by the time the playoffs come.”

The AL Central leaders are happy he’s back, too.

“Evidently he’s been doing a lot of work,” manager Tony La Russa said, “because his swing was on time. I mean huge, huge production, it was really impressive.”

José Abreu added three hits and two RBIs as the White Sox improved to an AL-best 43-23 at home this year. Luis Robert also had three hits and scored three times, and Yoán Moncada extended his hitting streak to 13 games.

The White Sox improved to 4-0 against the crosstown Cubs, winning the series for the first time since 2014.

The fourth-place Cubs scored six times in the first against Dallas Keuchel, but they couldn’t hold on against the powerful White Sox lineup. Patrick Wisdom homered twice and drove in four runs for the North Siders on his 30th birthday, and Michael Hermosillo hit a solo shot to go along with two impressive catches in center field.

Wisdom and Ian Happ connected in the ninth against former Cubs closer Craig Kimbrel before he fanned Austin Romine for the final out.

The 32-year-old Grandal had an immediate impact in his first game with the White Sox since he tore a tendon in his left knee July 5 at Minnesota.

He connected for his 15th homer in the third, tying it at 6 with a towering three- run drive to right against Keegan Thompson in the rookie right-hander’s third big league start.

“I set the tone from the beginning on the mound for us tonight, and just a long night,” Thompson said.

With two out and runners on first and second, Robert hit a popup against Adrian Sampson (0-1) that short- stop Andrew Romine dropped for his second error of the inning. Andrew Vaughn scored to give the White Sox a 7-6 lead, and Eloy Jiménez capped the eight-run rally with a two- run single.

Grandal added a two-run double in the fifth, a single in the seventh and another three-run shot in the eighth. He also threw out Frank Schwindel attempting to steal second in the second.

The successful return for Grandal overshadowed another rough outing for Keuchel, who was tagged for six runs, five earned, and seven hits. The left-hander was pulled by La Russa after he threw one pitch to Wisdom with a runner on first and none out in the second.

“It’s just not your day. I mean it happens to all starting pitchers,” La Russa said.

Since winning consecutive starts against Toronto and Tampa Bay in June, Keuchel is 2-6 with a 6.67 ERA in 12 games. 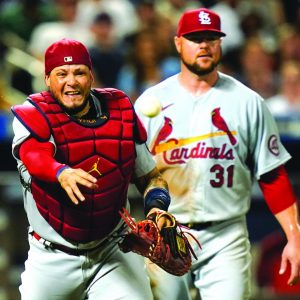