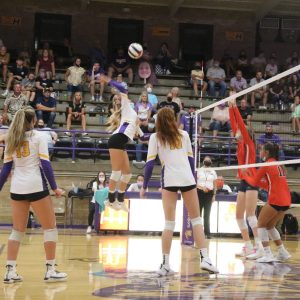 TAYLORVILLE — With her team watching behind her, junior Elle Richards charges up for the kill. Richards had a total of 2 kills and 10 service points in the match. In the foreground are Summer Brandis, number 13, left and number 19, Mazie Fleming, right. The Tornadoes swept the Bulldogs25-16, 25-17 Tuesday evening.

The Taylorville volleyball team hosted Mahomet- Seymore Tuesday night in the Taylorville High School gym. It was a scorching hot one inside, but the Tornadoes kept their cool collecting the match win, 25-16 and 25-17.

The match was underway with a Taylorville serve to the Bulldogs. Both teams wanted to prove they meant business coming up with firm blocks back to back. Abby Heberling being one of the Tornadoes to do so. The senior finished the night with 4 blocks and 10 kills.

Taylorville moved forward 10-3 before a time-out is called by the visitors. Mahomet wasn’t done yet. The Bulldogs found a way to climb back and even the game at 15. But Taylorville’s Elle Richards shut them down with a dev- astating block. The junior finished with 2 kills and 10 service points.

After a Bulldog serve to resume play with game 2 the Tornadoes remained dominant. Without showing mercy, Taylorville quickly went up 7-1. Senior Hannah

Clayton had a perfectly timed out of bounds save in the run. Clayton had 6 kills and 9 digs in the contest.

Mahomet-Seymore would get as close as 20-15, but

otherwise, this game belonged to the Tornadoes. They go on to cap the night off on a Summer Brandis serve resulting in the final point of the game and the

Taylorville will have their next volleyball match Thursday night at Mattoon, facing the Green Wave.