The Olson family has raised pigs on their Logan County farm for generations.

But, they’ll soon take it to the next level as third-generation farmer Blane Olson, and his wife Kristi, recently opened a new, 2,400-head wean-to-finish pig barn on their farm near Elkhart.

They plan to unload the first pigs into the state-of-the- art building early next month.

“We’re excited. This is something dad and I envisioned,” Blane told the RFD Radio Network. “We’ve always talked about it, but never really had the opportunity and right place to locate a barn.”

That changed a few years ago when Olson’s parents, John and Ann Olson, were fortunate enough to buy their home farm, which had space for a new barn, Blane noted. They also partnered with the Maschhoffs, a hog production company with headquarters in Carlyle.

“It really made sense as an opportunity to grow and diversifywhatwe’redoing,yet keep it in the scope of the grain farm,” said Blane, who returned to the farm out of college about 15 years ago. “I think we bring a unique perspective as we build our relationship with the Maschhoffs.”

The Olsons focused on show pigs for a number of years, a tradition passed down to Blane and Kristi’s four children, Braden, Kelten, Luke and Coley, which eventually prospered into a side business promoting and sell- ing their purebred Durocs to other 4-H members.

“With the expansion and growth of junior programs, we get to work with young people and their families really on a daily basis to help them achieve their goals and do the best they can with the Duroc pigs they bought from us,” Blane said.

With generations of experience raising pigs, the Olsons felt it was a natural fit to expand the swine side of their operation, which will also benefit their crop production.

“It fits really well,” Blane said. “We can utilize the manure on our grain farm as an added bonus. We’re excit- ed to see the fertility we get from the manure and reduc- tion of costs not buying as much (commercial) fertilizer.”

The Olsons’ project was initially slowed by the coronavirus pandemic, but it continues a trend of herd expansion in Illinois.

USDA reported in June the inventory of hogs and pigs nationwide declined 2%, but statewide it actually grew 3% to about 5.5 million head. The number of breeding animals in Illinois increased by 80,000 head as of June 1.

“For Kristi and I, it’s impor- tant to build and grow our farm to give our four kids at least the opportunity to come back (into the operation as adults) in some capacity,” Blane said. “It’s big to continue to build on that legacy to the fourth generation.”

The Olsons hosted an open house and ribbon-cutting ceremony at the new barn Aug. 23, in partnership with the Illinois Pork Producers Association and Illinois Livestock Development Group. The project began back in March 2020.

“It’s neat to finally open the doors and let people see what it looks like on the inside,” Blane said.

This story was distributed through a cooperative project between Illinois Farm Bureau and the Illinois Press Association. For more food and farming news, visit FarmWeekNow.com. 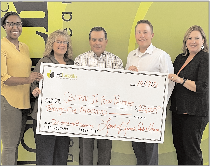