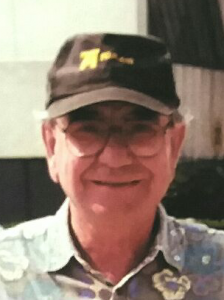 Richard Lee Wilson, 88 of Edinburg, passed away at 1:30pm on Thursday, September 30, 2021 at Memorial Medical Center in Springfield. He was born on July 22, 1933 in Mt. Sterling, the son of Charles W. and Wilda S.  (McConnell). He married Phyllis J. Mellon on February 2, 1956 in Barry and she preceded him in death on December 4, 2020. Richard proudly served his country in the U.S. Air Force during the Korean War. Following his time in the service, Richard went to work for the Dictaphone Corporation in Springfield. He spent his entire career with the company, retiring as a district service manager. He was extremely dedicated to his work and formed many close bonds with his coworkers. Richard always had a love of aviation. When he was younger, he obtained his pilot’s license and later in life loved attending air shows. He also had several special dogs throughout the years that were very special to him.

He is survived by his children: Marsha Turner (Steve) of Weatherford, Texas, Mitchell Wilson, of Edinburg, and Mark Wilson (Tammy) of Stonington. He was preceded in death by his parents, wife, brothers: Herbert Wilson and William Wilson.

Mr. Wilson will be cremated, and no services will be held at this time. His remains will be placed in the Edinburg Cemetery next to his wife. McClure Funeral Home and Cremation Services in Taylorville is assisting the family with arrangements. Memories of Richard, or condolences to his family, may be shared online at www.mcclurefuneralhome.com.