There were seven different schools that competed. The Taylorville girls team placed fifth. Second place was awarded to the boys team with senior Even Morgan awarded All-Conference Team.

The Apollo Conference Meet is the Cross Country version of the playoffs. All the schools work hard to show up for this race. Apollo is no easy conference when it comes to the running sport either. With schools such as Mt. Zion and Effingham having competing teams year in and year out.

The same can be said about Taylorville. Every year, the Tornadoes compete with the best of them. This year the meet took place on the smooth yet hilly golf course in Effingham.

Missing two of their top girls runners, Anna and Ella Goodman, for the past cou- ple weeks, they come back for this race. They were ready, too, with both of them finishing top three for Taylorville. Sophomore Ella finished 19th and Hallie Smith slid on in 20th for the Taylorville girls and junior Anna Goodman ended up 37th. Senior Kim Howard stepped up when she needed, coming in right behind Goodman at 39th.

Grayce Goodrow, Kyndra Durbin, Brooke Heimsness and Lydia Heberling rounded out the girls portion of the race. Finishing fifth out of six teams, the girls with a solid performance score of 130.

As always, next up were the boys. They have had this race circled on their calendars since the season started. Knowing they could finish high in the rankings only built the anticipation. Senior Evan Morgan led the pack for the Tornado boys. Boasting an impressive

ninth place. Just two spots behind him, in 11th place, was his brother, sophomore Owen Morgan. Junior Will Turvey and sophomore Jack Chesser finished top 20. Brothers Jesse and Dan Sloan, along with teammate Brenton Good, ended top 50 with Hayden Harker rounding out the Tornadoes finishers, coming in at 51st. This was a really good performance by the Taylorville cross country team. The way they handled staying together so closely earning their final positions proved how bad they wanted this meet. The boys officially ended up finishing second with a score of 77.

The team will enjoy a full week off, then travel to Jacksonville on Saturday, Oct. 23, to run for the IHSA Cross Country Regional. 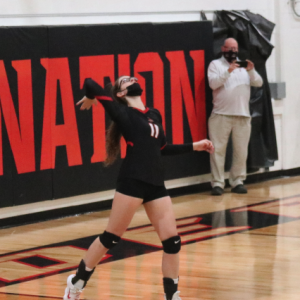 CAM takes down Tuscola in Regionals