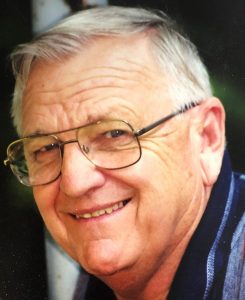 Richard was born in Princeton, Indiana on January 4, 1936, the son of Iven and Lena (McGrew) Vaughan. Richard graduated from Taylorville High School in 1955 Richard went on to earn a bachelor’s degree at Eastern Illinois University. While at Eastern, he played football, serving as quarterback for the Panthers. Richard returned to Eastern Illinois University after graduation as a Professor and Football Coach. Richard married Janet Mollohan on June 8th, 1958.

Richard pursued his dream of Airline Pilot and worked as a freelance pilot providing many services including area farmers for crop dusting fields to providing quick personalized travel for administrators of local corporations and medical physicians traveling to rural clinics. Richard retired from flying at approximately age 78.

Mass of Christian Burial will be celebrated for Richard at 11:00am on Tuesday, November 2 at St. Patrick Church. Visitation will be in the church prior to Mass, beginning at 10:00am. Attendees are encouraged to dress casually in Eastern Illinois University team colors of Blue and Gray.
Burial at Macon County Memorial Park will follow the Mass. Memorials in Richard’s honor may be made to Ss. James and Patrick Parish. Condolences may be left for the family at www.gracelandfairlawn.com.