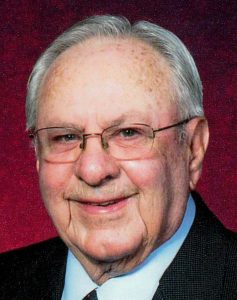 Charles William “C.W.” Brown, 91, passed away at St. Maryís Hospital in Decatur, Ill. on October 28, 2021, just short of his 92nd birthday.
C.W. (who was also known by family as Bill) was born on November 15, 1929, the son of J. Everett and Leona (Scott) Brown at their farm in Blue Mound, Ill. in northeastern Christian County.

After high school C.W. married and started working on the family farm. He was a long-time farmer in the Blue Mound area and started a successful country grain business, Osbernville Grain Company.

C.W. was preceded in death by his parents, as well as an older sister Eleanor Zeeb, a younger sister Elaine Bliler, his first wife Delores (Pistorius) Carls, his second wife Sally (Noe) Brown, and a granddaughter Sandi Brown.

C.W. is survived by his 3 children, Dr. Jay R. (Jean) Brown of Blue Mound, Ill., Kim S. (Janet Gaither) Brown of Ft. Myers, Fla. and Teresa (Greg) Phillips of Ft. Myers, Fla.. Five grandchildren survive as well, Lori (Brad) Horn of Richmond, Va., Lana (Tim) Casica of Little Elm, Texas, Jackie (Andy) Wieduwilt of Bloomington, Ill., Jason (Michelle) Brown of Blue Mound, Ill., and Matt (Emily) Brown of Temecula, Calif.. Nine great grandchildren also survive, Alicia & Amanda Casica, Jarrett & Makayla Wieduwilt, Cade Brown & Marcus Dees, Camryn, Charlotte and Amelia Brown.
Bill spent his last few years living at Imboden Gardens where he developed many new friendships and acquaintances, not only among the residents, but among the staff as well. In his younger years, he was an active member of the Blue Mound Masonic Lodge, where he was a Past Master, as well as Springfieldís Ansar Shrine Temple, and was a charter member of the Blue Mound Lions Club. In addition, he was an avid golfer and member of the Southside Country Club in Decatur. He loved his life, his family, baseball, and was extremely mentally sharp for a nonagenarian; spending quite a bit of time every day online, watching informative TV, as well as following local & national news in print.

Having grown up on a purebred cattle & livestock farm in his younger years, C.W. many times repeated what his ancestors had observed: “you can’t get Plow Horses outta Shetland Ponies” & “the Apple don’t fall far from the Tree.” C.W. Brown came from good stock and he passed on some good stock; his family is grateful for all that he did and left for them.

A funeral service, beginning with a masonic service to honor and celebrate Bill’s life will be held at 12:00 p.m. on Monday, November 1, 2021 at Dawson & Wikoff Funeral Home, Blue Mound. The family will receive friends for a time of visitation two hours prior to the service. Bill will be laid to rest in Zion Cemetery, Boody, Ill. Memorial contributions may be given to either Zion Chapel United Methodist Church or the Blue Mound Lions Club. Messages of condolence may be sent to the family at www.dawson-wikoff.com.