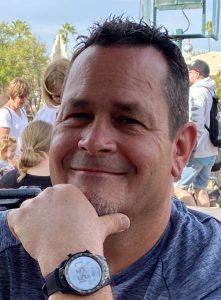 Jon Aaron Hergett, 53 of Taylorville, passed away with his family by his side and his children holding his hands, at 12:29 a.m. on Wednesday, November 24, 2021 at
Barnes-Jewish Hospital in St. Louis, Missouri following a courageous battle with complications of COVID. He was born on January 24, 1968 in Springfield, the son of David C. Hergett Sr. and Katherine G. (Schenkel) Hergett. He graduated from Springfield High School in 1986. Jon married Michelle R. Patton on May 12, 2001 in Taylorville.

He worked for AT&T as a fiber optic cable splicing technician. Jon was raised in the Catholic Church and was a member of Davis Memorial Christian Church. He was
a member of IBEW Local 21 in Springfield and previously served on the Sangamon County Rescue Squad. He was music-lover, especially rock from the ‘70s and ‘80s and also enjoyed dancing with his wife when they went out.

Jon will be remembered as a hard worker who was humble, light-hearted, and quickly loved by all who met him. He was an animal lover and had a special place in his heart for those living with disabilities. Above all, he was dedicated to his family who loved him more than anything.

He was preceded in death by his father; step- mother-in-law: Paula Patton; and grandparents.

The funeral service for Jon will be held at 10:00 a.m. on Tuesday, November 30, 2021 at McClure Funeral Home
in Taylorville with Monsignor David Lantz and Rev. Chad Foster officiating. Visitation will be held from 4:00 p.m. until 7:00 p.m. on Monday at the funeral home. Burial will take place at Oak Hill Cemetery in Taylorville. Memorials may be made to Christian County Animal Control.

McClure Funeral Home and Cremation Services in Taylorville is assisting the family with arrangements. Memories of Jon, or condolences to his family, may be shared online at www.mcclurefuneralhome.com.