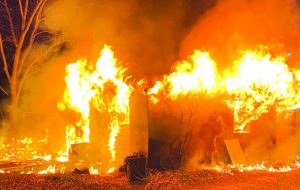 PANA — The Pana Fire Department was called to the scene of a garage fire behind 7 W. Washington St. about 6:20 p.m. Pana Fire Chief Rod Bland said the Illinois State Fire Marshal’s Office has been called in to investigate.

When units arrive, the garage was fully engulfed, Bland said. It was quickly brought under control and extinguished. Bland said there were no utility hook ups tot he garage, which is owned by Logan Hudson. Occupant of the home, Christopher Salazar, told authorities he was sitting int he driveway and noticed a yellow glow in the backyard. When he walked around to the back of the house, he found the garage on fire. No one was injured and no damage estimate was available. Anyone who might have seen anyone in the area around the time of the fire is urged to call the Pana Police Department with their information at 217-562-2141.

Focus on the future to feature presentation on resiliency/self-care