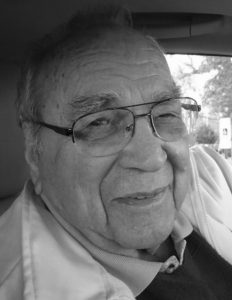 William Joseph Davis, 95 of Taylorville, passed away at 9:05pm on Monday, December 6, 2021 at Taylorville Care Center. He was born on November 29, 1926 in Taylorville, the son of Joseph Arthur and Alma (Bernowski) Davis. He graduated from Taylorville High School and served his country during World War II in the Merchant Marines. He married Patricia Shivers on June 6, 2007 in Taylorville and she preceded him in death on November 7, 2011. Bill worked for many years as a builder and developer of commercial properties in the Southwest. He was an avid reader and enjoyed golfing. He was a member of the Christian County YMCA where he enjoyed exercising. Bill enjoyed staying close to many of his high school friends, often going out to breakfast together. He was a member of the Community of Christ Church. Bill was a faithful supporter of many charities and was dearly loved by his family and friends.

Mr. Davis will be cremated, and an inurnment will take place at a later date at Oak Hill Cemetery in Taylorville. McClure Funeral Home and Cremation Services in Taylorville is assisting the family with arrangements. Memories of Bill, or condolences to his family, may be shared online at www.mcclurefuneralhome.com.