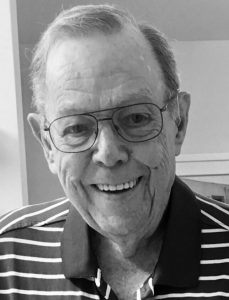 Frank H. Sliney, founder and co-owner of local Franmar, Inc. passed away Wednesday morning, December 8, 2021, surrounded by family and beloved pups, Elphie, Beau, and Carson, at his home in Bloomington.

His visitation will be from 4 to 7 pm on Friday, December 17, 2021 at Carmody-Flynn Funeral Home, Bloomington, where food and soft drinks will be provided. A memorial service will be held at 10:30 am on Saturday at Carmody-Flynn, with inurnment at Evergreen Memorial Cemetery immediately following services. Cremation rites have been accorded.

He was preceded in death by two brothers, William John Sliney and Charles Morse Sliney Sr., both of whom served in the United States Navy during WWII.
Frank was a veteran of the U.S. Marine Corps, having served in Korea and Italy.

Frank received his bachelor’s degree from the University of Florida and later attended the New York Institute of Finance.

Originally from Boston, Frank worked in Florida as an IBM salesman, and then later as a stockbroker and vice president of a mutual fund. As Frank often remarked, tongue in cheek, “through a series of bad breaks and misunderstandings,” he found his way to Bloomington as an assistant manager of a local restaurant. Frank had a variety of jobs over his lifetime, including shining shoes and selling newspapers as a kid in Boston, selling sandwiches on a motorcycle at UF, co-owning a bar with go-go dancers, and even selling cemetery plots. Later, things went from “good to great to wow” when he founded Franmar alongside wife Marilyn.

Frank was a passionate golfer and a devoted Florida Gators fan. He enjoyed watching many sports, playing poker, and following current events and politics.
He is a friend of Bill W. and was a founding member of Cedar Lake Fellowship in Bloomington. As quoted about Frank from Fellowship members:
“He’s an old-fart, tough on stuff.”

“If you’re going to ask Frank about his daughter, you better grab a chair.”

In lieu of flowers, memorials may be made to St. Jude’s Childrenís Research Hospital. To express condolences online, please visit www..carmodyflynn.com.