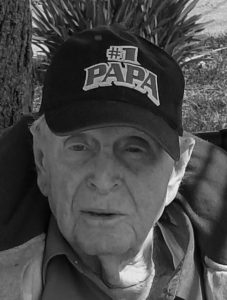 Hewsey I. Copelin, 95, of Edinburg, passed away on Sunday, December 12, 2021 at Carriage Crossing Senior Living in Taylorville. Hewsey was born on July 26, 1926 in Xenia, Ill., the son of Ira and Oakley (McCormick) Copelin. He married Wilma Hobbs on April 30, 1948 and she preceded him in death in 2007. After serving during WWII and the Korean Conflict in the United States Army, he went to work for Fiat-Allis and eventually retired from there. Hewsey was a member of South Fork Church of Christ and enjoyed gardening, working as a handyman and square dancing.

He is preceded in death by his parents, his wife, two brothers and two sisters.

He is survived by his three sons, Mike (Addie), Jeff (Martie) and Hoy (Cindy) Copelin; four grandchildren, Jason, Joshua (Amanda), Zac (Tiffany), and Patrick (Destiny); nine great grandchildren; two sisters, Wreatha Huff and Patty Jo Cincebox; one brother, Bill (Inez) Copelin and several nieces, nephews and cousins.
Visitation will be held on Thursday, December 16, from 12:00PM until the time of the funeral at 1:30PM at Wilson Park Funeral Home, 109 E. Washington Street, in Edinburg with burial will follow at Edinburg Cemetery. The family requests that no Poinsettias be sent.

Memorial donations may be made to St. Judeís Children’s Hospital.

Wilson Park Funeral Home in Edinburg is in charge of arrangements.