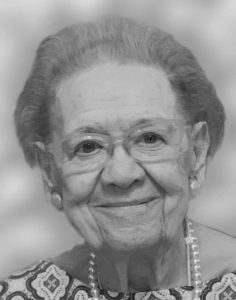 Funeral service will be 12:00 PM, Friday, December 17 at Brintlinger and Earl Funeral Home, Decatur. Visitation will be 10:00 – 12:00, Friday at the funeral home. Burial will be in Graceland Cemetery. A luncheon for family and friends will be at the Macon County Farm Bureau following the committal service. Memorials in Maxine’s honor may be made to the Alzheimer’s Association.

Maxine was born September 20, 1926 in Mt. Auburn, the daughter of Earl James and Fern (Dingman) Elder. She married Robert Van Der Voort on December 20, 1953 and he preceded her in death April 4, 1979. Maxine was a bookkeeper for many years with Crown Oldsmobile. She was also a Tupperware dealer. Maxine enjoyed staying active in bowling leagues and thoroughly enjoyed travel with highlights being trips to Germany and Hawaii. Maxine was a member of Kiwaniennes. Faith was important as she grew up in Berea Christian Church and later Prairie Avenue Christian Church, where she was a member for over 60 years.

Condolences and memories may be shared with the family in care of Brintlinger and Earl Funeral Homes at www.brintlingerandearl.com.