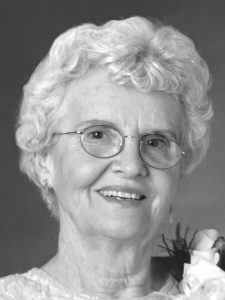 Dolores graduated from Taylorville High School in 1948 and attended Springfield College in Springfield, Illinois.
After marrying, Dolores and Frank began a life adventure which included living near Fort Sill Oklahoma, then on to Houston and Hitchcock, Texas where they had five children. They returned to Taylorville in 1959, to purchase what would be Hurtte Oil Company where Dolores worked alongside her husband as office manager and bookkeeper.

Dolores’ life was strongly influenced by her love for Christ, husband, and family. She and Frank were founding members of the Taylorville Evangelical Free Church. For several decades she was actively involved in the Christian Women’s Club and Child Evangelism.

In 1983, Dolores, along with her mother, Opal Antle, and mother-in-law, Ula Hurtte, opened the Plainview School House, a Christian bookstore, and tearoom. She was famous for her pies throughout Christian County and Central Illinois.

Dolores was preceded in death: by her husband; her brother, Norman Antle; and two grandsons, Donald Burton III and Robert Gisler.

She is survived by; her five children and their spouses, Frank Hurtte and Gail McPike of Davenport, Iowa; Peggy Jo and Steve Souers of Ocean Springs, Mississippi; Randy Hurtte and Adriana (Hernandez) of Juneau, Alaska; Susan and Kevin Gisler of Stewartville, Minnesota; and Sally and Don Burton of Taylorville; 16 grandchildren and 30 great-grandchildren.

A memorial service is being planned for later date.