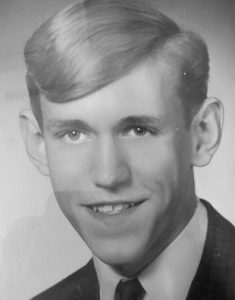 James (Jim) R. Bantner, 72, of Fort Worth, Texas, formerly of Taylorville and Springfield, Ill, passed on Friday, December 3, 2021, at the Veterans Hospital in Dallas, Texas. Jim will be deeply missed by his son and his family.

Jim was born March 12, 1949, in Taylorville, Ill., to Edna Earle Hancock Pearson and Robert J. Bantner. Jim graduated from Taylorville High School in 1967 and received his Associate Degree from Dallas Baptist University. He served in the US Marines Corp. His last employer before retirement was Fidelity Investments in Westlake, Texas. Jim enjoyed friends, family, and fishing.

Preceding Jim in death was his sister, Marie Watts, his father Robert J. Bantner, his stepfather Paul Pearson, his nephew Nicholas Adam Santini, and his grandparents.

Cremation will be performed by Jim’s Funeral Service, Hurst, Texas. Burial will be at Dallas-Fort Worth National Cemetery, time and date TBD.