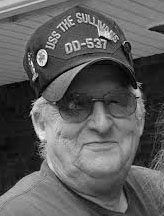 Visitation will be held on Friday, January 14, 2022 from 4:00-7:00 p.m. at Sutton Memorial Home in Taylorville, Ill. Graveside service will be held on Friday, February 18, 2022 at 11:00 a.m.at Edinburg Cemetery in Edinburg, Ill., with Pastor Earl Baker officiating. Inurnment will be in Edinburg Cemetery with military graveside honors immediately following the service.

Memorials may be made to the American Diabetes Association PO Box 15829 Arlington, VA 22215