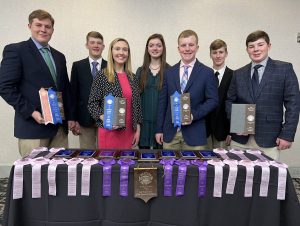 TAYLORVILLE — Over the past 18 months, seven Taylorville FFA members have been working extremely hard practicing their livestock judging skills in preparations for several contests throughout the United States and Illinois. This past May the team won the opportunity to represent Illinois and Taylorville FFA at the National Western Round Up in Denver, CO by placing 2nd at the State FFA Contest.  Livestock judging contests require students to evaluate cattle, sheep, swine, goats, and then present oral reasons defending their decisions. Taylorville FFA has traveled to the Geneso FFA Invitational, Black Hawk East Event, Fort Scott Invitational, Joliet Junior College Event, Illinois Central College Event, Lincoln Land College Invitational, the State FFA contest, and now made an appearance at the National Western Round Up. During the teams time in Colorado, they had the opportunity to tour and judge at Advantage Feed Yard, evaluate lambs at Olsen Show Stock, attend the National Western Stock Show, visit Golden Colorado, and attend the National Western Rodeo. This was an experience of a lifetime for these FFA members.

“I am very proud of the team and the time and dedication they put in this event. The entire team performed exceptionally well. I am very proud of the fact that three team members won a specie division at this prestigious national event. This is the first time in my coaching career I can remember this happening. Our team’s public speaking and cattle evaluation ability is how our team secured a 2nd place national finish. These kids have put in the hard work and effort to reach this high level of success. The fun part for the kids is that colleges will be calling and recruiting. These students are not only talented judges they are excellent students and are all either high honor or honor roll students at THS. They are also some of our best community servants. “ says advisor Sue Schafer .

This team will continue their work and hope to compete at the American Royal, National FFA Livestock Judging Contest, and have dreams of competing at the Royal Highland Show in Edinburgh, Scotland in the near future. This team will be back in action at the Iowa Beef Expo the second weekend in February.

Illinois’ COVID-19 disaster proclamation to end in May

People in the news

How to winter sow native plant seeds in a milk jug