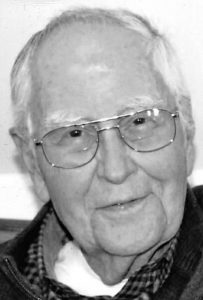 Fred served in the U.S. Army in the 16th Infantry Regiment. He served in World War II, inducted into service July 25, 1944 with basic training Fort Hood, Texas. He was sent to serve in France then on to Belgium and Germany, where he was a member of the rifle squad and went on day and night patrols. He was a runner caring messages under fire and kept in contact with other regiments, with his patrol being behind enemy lines. Fred was part of the Northern France Campaign, Andennes Campaign, Rhindeland Campaign and Central European Campaign, where he received 4 Bronze Stars, 2 Purple Hearts and the Good Conduct Medal. Fred was injured in the last conflict in Bonn, Germany and spent many months recovering at VA hospitals, then went on to work on the family farm.

Fred went to work at the Elgin Watch Factory. He came home to marry Amber L. Lindhorst on April 15, 1948 and together they purchased a farm. They made that farm successful and went on to build on that by buying & selling until they had a total of 3 different farms in Fayette County. They sold the last farm and moved to Pana to establish the Dodson Furniture and Homes. Amber preferred the sales part of the business, and Fred preferred the construction part and to be out building something or helping someone. He would build family homes for his brothers, Amber’s brothers & many families. He and Amber had succeeded in building a business for their family. Fred owned a grocery store in Bingham, built rental property in Pana, and had furniture stores in Benton, Taylorville, and Pana.

Fred said that he accepted Christ in a cornfield while working. He was a member of the Hopewell Baptist Church. He loved listening to the old church songs while he was at the nursing home and would always ask the nurses to sing to him.