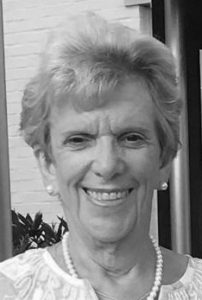 The funeral home of Howe and Yockey in Shelbyville, IL, is assisting the family with arrangements for the 11:00 a.m. Saturday, February 19, 2022 memorial service that will be livestreamed. The Rev. James Jones will officiate. A visitation will be held from 10:00-11:00 a.m. Saturday in the funeral home. Burial will be in Glenwood Cemetery, Shelbyville, Ill. In honor of Vicki’s love of the Republican Party and its principles, in lieu of flowers, memorial contributions may be made to the Lincoln Series, a leadership program for young Republican women in Illinois dedicated to increasing the number of young Republican women serving in governmental and political positions at the local, state and federal levels. Memorial contributions can be mailed to The Lincoln Series, 3538 N Reta Ave., Chicago, IL 60657 or made online at www.LincolnSeries.com.

Vicki was born on July 13, 1951 in Shelbyville, Ill., the daughter of William Ernest and Peggy Ann (Gallagher) Sands. She graduated from Shelbyville High School in the Class of 1969 and attended Lake Land College in Mattoon, Ill. One of her first public service jobs was with her state representative, Roscoe D. Cunningham.
She moved to Washington, D.C. to pursue a career in public service, working for Congressman Dan Crane of Illinois from 1979 – 1985 and then for Veterans Affairs Secretary Edward Derwinski. From 1989 until her retirement in 2016, Vicki worked at the U.S. Department of the Interior, serving six Secretaries of the Interior there.

Members of Congress and others also knew her as an active member of the Capitol Hill Club and the loving companion of the late former House Minority Leader Robert Michel of Illinois during the last decade of his life.
Over the years Vicki served under both Republican and Democratic administrations at Interior. “Vicki Dixon was the example par excellence of a career public servant who did not work for public attention but for the sake of the country she loved,” said former Secretary of the Interior Dirk Kempthorne. “She didn’t seek to win media coverage, but she won the hearts of many from the highest to the most humble positions in the nation’s capital through her kindness and professionalism. “

At the Department of the Interior, Vicki worked in the Secretary’s office and the Bureau of Land Management as an expert in external affairs. She engaged with public officials, constituent groups and stakeholders to improve communication and collaboration on bureau and departmental priorities. She was highly regarded for her seamless coordination of meeting and events for the secretary and other Interior leadership.

Even after she moved to the Washington, D.C. area, Vicki always kept her family and roots in Illinois closest to her heart. She and Leader Michel made it clear that they were two of the biggest Chicago Cubs fans anywhere.

Family and friends from far and wide agree that Vicki Dixon was best known for bringing people together and being the cog in a very large wheel of friends. She knew each by their likes and needs and all who were part of this large wheel could call her their best friend. She was known for her kindness and generosity and was a friend to all no matter a person’s state in life. When she knew that a friend or acquaintance was ill or in need of assistance, Vicki would be the first person to step in and help. She was frequently described as an angel on Earth.

Most of all, Vicki was dedicated to her family. Even though her three brothers were no longer living, she spoke of fond memories and how much she missed them. She adored her sister, Kristi Bright of Creve Coeur, Illinois, and visited with her as often as possible. Her mother, Mrs. Peggy Smith of Taylorville, Illinois, was her best friend. After Vicki retired, she was able to spend more time visiting her mother and family. She loved her time in Illinois and on trips with her family.

In September 2021, Vicki moved to Naples to live-out retirement in a home she was having built to welcome friends and family. She was looking forward to her new chapter. She was meeting new friends, joining the Lely Presbyterian Church and volunteering as she always did-earning her heavenly angel wings many times over.

She was preceded in death by her husband, Peter Dixon in 1998; by her father, William ”Bill” Sands; and brothers, Mike, Scott, and Jimmy Sands.
Send condolences as www.howenadyockey.com