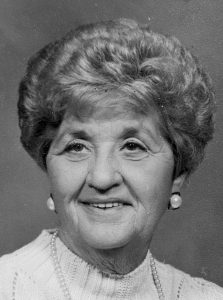 Barbara was born on October 30, 1933 in Sangamon County, Ill, the daughter of Hershel “Ike” and Julia LaVerne (Cherry) Hays. She graduated from Moweaqua High School. Barbara worked at Maton’s Flower Shop in Taylorville, State of Illinois in Springfield, Trulock’s in Assumption and was a retired domestic farm goddess. She served on the Christian County Board Finance Committee for many years. Barbara married Carl Robert Schloz. She later married Bartholomew “Bart” Barror on August 28, 1971. He died on October 1, 1993. Barbara was a member of St. Mary’s Catholic Church in Assumption, ladies auxiliary of the church, Optimist’s Club in Assumption, Christian County Democrats’ Ladies Society and the Women’s Golf League at Lakeshore Golf Course in Taylorville. Barbara was a die-hard fan of the Chicago Bulls, Fighting Illini Basketball, St. Louis Cardinals and the Chicago Cubs. She was an avid golfer and enjoyed reading and crocheting, but the most joyful interests in her life were her children and being a “Gram” to her many grandchildren.