Tom Latonis Breeze-Courier Writer (PANA) — The Pana Panthers boys basketball team committed an uncharacteristic 18 turnovers in their semi- final game with Litchfield on Wednesday night in the PHS gym, but still managed to take control of the game in the second half to coast to a 71-51 win over the Purple Panthers. Pana will face Salem, a 59-40 winner over Vandalia, in Friday’s Feb. 26, 2022 regional finals contest as 7:00 p.m.

“Litchfield came out and played really hard and we didn’t rebound very well and eventually, that’s going to cost us,” Head Pana Boys Basketball coach Adam Metzger said. “But we turned around in the second half, got some rebounds which allows us to get out and run. I think that was the big difference.”

Pana got a big scoring night from senior Brendon Schoonover who led all scorers with 30 points.

“He did a nice job against their zone, initially he hit a three and then you’re just questioning what the heck I got to do to guard him,” Metzger said of his 5-10 senior. “He got out in transition to run, got his hands on passes. It’s not just his scoring, he shares the ball well with teammates and doing all of the little things.”

Senior Devon Peebles added 16 point and brought the crowd to its feet with a first half flush. Kyle Kuhn recorded a double-double as he scored 11 points and had a dozen rebounds.

“I always say, ‘Seniors die hard.’ and Kyle Kuhn may be the hardest one to pick off if you are an opposing team,” said Metzger. “He’s going to give it everything he has. He went hard to the boards from the opening tip and kind of controlled the game. I thought every time the team needed a basket or needed a pass, a stop, whatever it was Kuhn was there.”

Colin Schmitz put in 8 points with Max Lynch and Drew Hackler rounding out the scoring with 3 points apiece.

Victor McGill, just a sophomore, led the Purple Panthers with 17 points and 6 rebounds as the team ends the season with a 14- 13 record.

Pana ended up going 8-of- 18 from the free throw line for 44% and Litchfield was 4-of-6, 67%. Pana owned the glass with a 33-19 advantage on the boards. After Kuhn’s dozen came Schoonover with 8 and Hackler with 6. Peebles grabbed 4 caroms.

The Panthers will face the Salem Wildcats in the Class 2A Pana Regional Friday night at 7:00 p.m. The Wildcats are 15-12 and riding a 4-game winning

streak. In last night’s game, Caden Bee had 18 points to lead the Salem attack. Whatever the record, Metzger knows it will be tough sledding as the games continue.

“Every team’s a good team at this point,” Metzger said of the potential opponent on Friday night. “You got to show up, got to prepare and you’ve got to bring your ‘A’ game.”

(PANA) — Senior Brendon Schoonover drives toward the basket during Pana’s 71-51 win over the Litchfield Purple Panthers in the Pana Class 2A Regional semi-final on Wednesday night. The 5-10 senior blistered the nets for 30 points in the game.

(PANA) — Pana’s defense swarms Litchfield ball handler Keenan Powell during the Class 2A Regional basketball game int he Pana High School gym on Wednesday night. From left are Pana defenders in the white jerseys, Brenden Schoonover, 13; Drew Hackler, 23 and Devon Peebles,22. The Panthers of Pana got a 20-point win, 71-51 over the Purple Panthers of Litchfield in the game and will face Salem in the regional finals on Friday at 7:00 p.m. 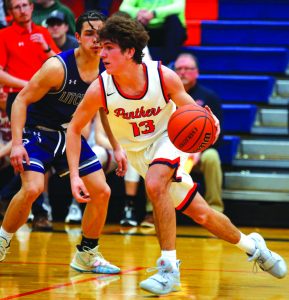 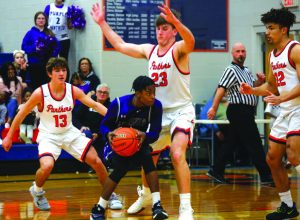