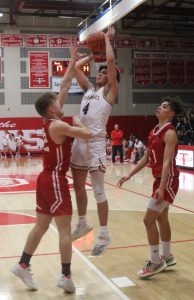 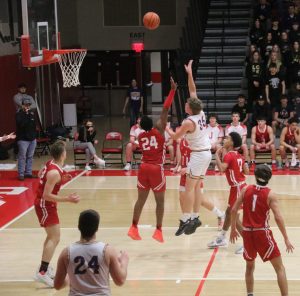 CHATHAM — The 2022 IHSA Chatham Regional began on Wednesday night. The Taylorville boys basketball team took on Jacksonville at Glenwood High School. The game was a back and forth aggressive fight by both teams who knew this game could be their last. Unfortunately, for the Tornadoes, this was theirs. They drop the low- scoring close match to the Crimsons by a final score of 35-33.

“Hard to find a rhythm in this game offensively.” Head Coach Ryan Brown states. “We just couldn’t get going in transition tonight.” However, this fact was true for both teams who struggled to move the ball down the court. The score at halftime, 12-9, was verification of this. The Tornadoes were highly aggressive and scrappy on defense but careless with the basketball with plenty of turnovers and questionable shot selection.

Seniors Bryce Friedrich and Luke Markwell lead the Tornadoes in scoring with a combined 17 points. Kamren Heimsness and Dylan Brown both added a combined 8 points of their own. Will Bitschenauer, out of the starting line up on Wednesday night due to an illness, was replaced by freshman Drake Howard. Howard had the most minutes in his career so far by making his first start. He added 5 points to the total. Junior Will Turvey came in late in the match and smacked a three-pointer which would be the junior’s only points. Each player played hard but just showed flashes of themselves and how they have played all season long.

Jacksonville just seemed one step ahead of the Tornadoes all game long. When Taylorville would tie the game the Crimsons would serge back and go up by 5. Neither team went up by double digit numbers in the contest. Keeping the game close just like the defensive first Tornadoes like it. They couldn’t walk away with the win though as it came down to just two points. Taylorville falls to the Jacksonville Crimsons, 35-33 the final. Taylorville finishes the 2021- 2022 season with a positive 16-15 record.

“I don’t think many people would have expected us to win 16 games, 10 or even 6 for that matter.” Brown admits. “Great group of leaders and overachievers. They knew their role better than any other team I have ever coached.”

The emotional Coach Brown obviously connected to this special group of young men. Holding back a heavy amount of emotion Brown shares some high praise to the team.

“Best defensive team I have ever coached.” Brown said confidently. “We lost 15 times this year but we were undefeated in every single practice.”

This game may have ended this basketball season, but for the Tornadoes, it’s a little more than just a loss.

“It is important for our seniors to understand that they are passing on a torch of culture.” said Brown. “This is who we are, this is what our identity is and we want to make sure that continues on.”

CHATHAM — Senior Bryce Friedrich doing his best Kareem Abdul-Jabbar impression in the first half in the Regional game against Jacksonville. Friedrich finished his final game with 11 points.

CHATHAM — Dylan Brown with the contested shot close. The senior finished with 3 points in the tight two point loss to the Crimsons.