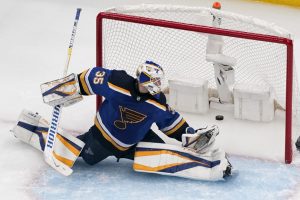 Kadri scored three goals, including two during a four-goal second period barrage, and the Colorado Avalanche beat the St. Louis Blues 6-3 on Monday night to take a 3-1 lead in their Western Conference series.

“I wanted to come out tonight and really put a mark on this game, especially after what happened,” Kadri said. “I tried to do that as best as possible. Sometimes you’ve got to be patient and you’ve got to wait. I was able to strike early in the second period and was able to get the mojo going.”

Kadri, who was booed heavily every time he touched the puck, skated towards the glass and appeared to salute the Blues fans after each of his first two goals, inciting even more jeers. It was his first career playoff hat trick.

“I know that they’re booing me and what-not, but that’s what being a fan is,” Kadri said. “As a home team and a home player, you want the fans on your side and heckling the other team, as long as it’s within the guidelines. I’ve got no issues with that and I know what was said isn’t a reflection on every single fan in St. Louis. I understand that and I want to make that clear. But for those that wasted their time sending messages like that, I feel sorry for them.”

Kadri said he heard no racial taunts from the crowd on Monday.

“Naz’s focused, he’s a big boy, he’s a tough guy, and he’s a resilient guy,” Avalanche coach Jared Bednar said. “And we’re proud of him as a group and we have a task that we’re trying to complete and Naz understands that and it’s unfortunate he has to deal with it and he knows that we’re all with him and that’s what we care about.”

Erik Johnson and Devon Toews also scored and Mikko Rantanen added an empty netter for the Avalanche, while Darcy Kuemper made 17 saves.

David Perron scored twice and Pavel Buchnevich had a goal and an assist for the Blues. Ville Husso, making his first start since Game 3 of the first round against Minnesota, made 31 saves.

Game 5 is Wednesday in Colorado.

“We got outskated for most of the game 5-on-5,” Blues coach Craig Berube said. “It’s pretty simple. I don’t know why. We got outskated. They outskated us. Got to every loose puck. Lost a lot of puck battles.”

The Avalanche took control of the game — and the series — with three goals in less than a two-minute span early in the second period.

Johnson got it going with his first of the playoffs at the 2:44 mark. Kadri gave the Avalanche the lead with his first at 4:07 and Toews scored 19 seconds later to make it 3-1.

Kadri said Berube’s comments after Game 3 were part of his motivation. When asked about the collision following the game, Berube referred to Kadri’s past disciplinary action from the league office.

“He made some comments that I wasn’t a fan of,” Kadri said. “I guess he’s never heard of bulletin-board material.”

Kadri gave Perron a late shove a minute later, causing retaliation by Perron and Buchnevich that landed them both in the box with minor penalties. Colorado did not score on the two-man advantage, but Kadri buried his second goal moments after it ended to make it 4-1.

Perron and Buchnevich each scored power play goals late in the second to bring the Blues back within one, but Kadri’s goal midway through the third scuttled the comeback attempt.

“It was awesome,” Johnson said of Kadri’s hat trick. “I felt so good for him. You know, imagine being in his situation, it can’t be a fun thing. Like I said, no human being should actually receive that type of treatment, especially with a hockey game. … I think he liked being the villain tonight and he certainly stepped up for us.”

Perron gave the Blues a 1-0 lead five minutes into the game and they escaped the first period with the lead despite getting outshot 15-3. Husso made several tough saves drawing chants of “HUSS!” from the crowd.

“I’m not sure we ever had control of the game, even though we scored first,” Perron said. “We didn’t make them defend hard enough. We had some pushes, but not nearly consistent enough to win a hockey game.”

St. Louis police are investigating the threats made towards Kadri. The NHL told the AP on Monday that it is working with the St. Louis Police Department to employ enhanced security procedures both at the arena and in the hotel.

Colorado is 4-0 on the road this postseason and is the only team without a loss away from home. The streak ties the second-longest postseason-opening road winning streak in franchise history with the 2001 team. The longest streak is a 7-0 start by the 1999 team.

NOTES: Blues D Torey Krug skated with the team during the morning skate for the first time since sustaining a lower body injury in Game 3 against Minnesota. There is no update on his return. … Avalanche C Alex Newhook played in his first playoff game this year and got an assist on Johnson’s goal. … Blues F Vladimir Tarasenko played in his 88th career playoff game, moving him into a tie with Jaden Schwartz for fifth-most in franchise history. … The Blues recalled G Charlie Lindgren from Springfield, its AHL affiliate, under emergency circumstances on Sunday to back up Husso.