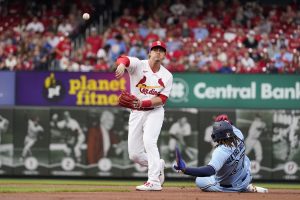 Toronto Blue Jays’ Vladimir Guerrero Jr. (27) is out at second as St. Louis Cardinals second baseman Nolan Gorman fails to turn the double play during the first inning of a baseball game Tuesday, May 24, 2022, in St. Louis. The Blue Jays’ Bo Bichette was safe at first. (AP Photo/Jeff Roberson)

“It was my first time to be in the stadium here and obviously it’s a really cool stadium,” Jansen said. “It was fun. It was nice for us to get some breathing room. Guys were putting great swings on the ball and getting hits. Hitting is contagious. It always is.”

Kevin Gausman (4-3) threw six scoreless innings with eight strikeouts and no walks. He allowed four hits and beat the Cardinals for the first time in eight appearances.

“For us to get our mojo back and have that high energy and everybody talking in the dugout, that was nice to see,” Gausman said. “Any one of these guys can hit a home run at any given moment.”

Toronto split the two-game series and ended the Cardinals’ winning streak at four.

“It was a great day,” Blue Jays manager Charlie Montoyo said. “We needed this day. Gausman gave us what we needed. We rest the bullpen. It was great to see the offense come alive.”

“The whole game I felt like I didn’t have command of my fastball,” Hicks said. “The fastball is the game changer for me. I can’t be out there throwing slider or curveball every pitch. It’s frustrating.”

Alejandro Kirk led off the fourth with a single and Matt Chapman walked before Jansen hit a 3-2 slider from Hicks off the foul pole in left to make it 4-0.

“I was just hoping it wouldn’t hook too much,” Jansen said. “That was really cool. I’ve talked about getting out of my own way. I’m good at pulling the ball.”

Jansen led off the seventh with a blast estimated at 427 feet for his fifth homer this season and third multi-homer game of his career.

Guerrero then greeted reliever Drew VerHagen with a homer to left. He had singled in the first inning to snap an 0-for-14 drought.

“Obviously if I tell you that I didn’t enjoy it, I would be lying to you guys,” Guerrero said through a translator. “When you hit a homer, you’ve got to enjoy it.”

It was Guerrero’s second homer of the month and his first in 15 games.

“Before he did that, he was talking in the dugout that for the first time he feels locked in,” Montoyo. “Like he can see the ball right. That bomb he hit, that was good to hear.”

Rookie Brendan Donovan had an RBI single in the seventh for the Cardinals.

“Game got away from us,” St. Louis manager Oliver Marmol said. “Gave up some extra outs. Not our best baseball.”

FACES IN THE CROWD

NHL great Wayne Gretzky sat with Cardinals president Bill DeWitt III in the owner’s box by the side of the St. Louis dugout. … Hall of Famer Ted Simmons was at the game and was given a replica of the the bronze statue erected outside the stadium in 2021. The item will be given away as a promotion for Sunday’s game against Milwaukee.

Paul Goldschmidt walked in the first inning and has reached base safely in 30 consecutive games, the longest streak in the majors this season. It’s the longest on-base streak by a Cardinal since Matt Carpenter reached in 35 games from July 8-Aug. 17, 2018. Goldschmidt singled in the third to extend his hitting streak to 16 games.

Cardinals: Adam Wainwright (5-3, 2.87) starts the opener of a home series against Milwaukee on Thursday night. He is 20-13 against the Brewers, his second-most wins against any opponent, trailing Pittsburgh (23).