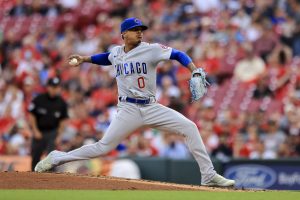 Chicago Cubs’ Marcus Stroman throws during the first inning of a baseball game against the Cincinnati Reds in Cincinnati, Tuesday, May 24, 2022. (AP Photo/Aaron Doster)

CINCINNATI (AP) — Frank Schwindel homered twice in a game for the first time in his career, Marcus Stroman recovered from a rough start to pitch five effective innings, and the Chicago Cubs rolled past the Cincinnati Reds 11-4 on Tuesday night.

The Cubs have hit a major league-leading 19 homers since May 14, going deep in 10 of 11 games. Schwindel has three homers in the first two games of the four-game series at Cincinnati.

“Definitely a good day, looking to build on that,” Schwindel said. “Had a pretty good last week or so. I don’t know if it’s weather, baseballs, whatever, I’ll take it.”

Stroman (2-4) needed 37 pitches to get through the first, allowing four singles and two runs to the first five batters. But he cruised after that, retiring 14 of his final 16 batters with two walks. He struck out eight.

“Not ideal to throw 37 pitches in the first inning (but) I always battle. It’s something I’ve always done,” Stroman said. “I was able to settle down, really focus on my mechanics. I’m a little bit of a mess with my mechanics. Just fighting it a little bit.”

Stroman felt like he was finding his groove just before being placed on the COVID-19 injured list on May 8. Tuesday’s start was his second since May 1.

“For him to settle in and get through five was really impressive for me,” Cubs manager David Ross said. “His fastball command got a little bit better. Some balls in the first inning found some grass. It was a tough first inning, but he just settled in.”

The Cubs led 3-0 in the first against Tyler Mahle (2-5) thanks to a sacrifice fly by Seiya Suzuki and Schwindel’s two-run homer.

Alfonso Rivas drove in two runs in the third with his first career triple to put the Cubs ahead 5-2.

“Whether you get beat by several runs or one run, it doesn’t get any easier to take,” Reds manager David Bell said. “It makes it tough when you get behind like that. We are so used to having Tyler (Mahle) on top of his game. Tonight just wasn’t his night.”

Schwindel went deep against Mahle again in the Cubs’ five-run fifth, his sixth homer this season. He has five multi-hit games in eight appearances against the Reds, batting .333 in that span.

“His timing just continues to get better and better,” Ross said. “Just staying on the baseball, using the whole field. That’s really rewarding when you drive the ball, get it in the air to right field. Really big hits for us.”

Andrelton Simmons added a two-run single later in the fifth. Mahle was charged with a season-worst eight runs in four-plus innings. He has allowed 16 homers to the Cubs, his most against any team.

Ian Happ, who has destroyed the Reds since being drafted by the Cubs out of the University of Cincinnati, went 0-for-5 at the plate on Tuesday, ending a streak of 19 consecutive appearances in which he has reached base against the Reds, dating to April 30, 2021. Happ had a home run, double and four RBIs in Monday’s series opener.

With the Reds trailing 10-3 in the ninth, shortstop Matt Reynolds made his second appearance on the mound. He allowed one run on one hit and hit two batters. Reynolds last pitched on May 4, allowing two hits in 1/3 of an inning in an 18-4 loss at Milwaukee.

Cubs: Schwindel started at designated hitter after Yan Gomes was scratched with left oblique soreness. … C Willson Contreras was not placed on the injured list Tuesday, which was the last day the Cubs could backdate the move. Contreras is day-to-day with right hamstring tightness.

Reds: 2B Jonathan India’s hamstring was examined on Monday and it is not fully healed. It could be up to two weeks before he plays again.

Cubs RHP Kyle Hendricks (2-4, 4.89 ERA) is looking to rebound after allowing a career high-tying four homers on Friday against Arizona. RHP Luis Castillo (0-2, 4.60) will make his fourth start since beginning the season on the IL with a right shoulder strain.