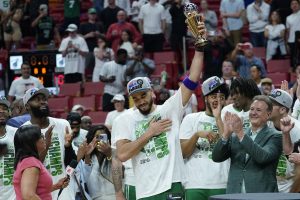 MIAMI (AP) — Not this time. After being thwarted on the doorstep of the NBA Finals three other times in the previous five seasons, the Boston Celtics have broken through.

The beasts of the East, again.

And now a chance at an NBA title awaits.

Eastern Conference finals MVP Jayson Tatum led the way with 26 points, Jaylen Brown and Marcus Smart each added 24 and the Celtics beat the Miami Heat 100-96 on Sunday night to earn a berth in the NBA Finals against the Golden State Warriors.

“This is amazing,” Smart said. “We finally got over the hump.”

It was Boston’s first Game 7 win on another team’s home floor since topping Milwaukee for the 1974 NBA title; technically, the Celtics were the “road” team when they beat Toronto in a Game 7 two years ago at the restart bubble, but that was at Walt Disney World.

Tatum — wearing a purple-and-gold armband bearing the number “24” of Los Angeles Lakers Hall of Famer Kobe Bryant, his favorite player — had lost two East finals in his young career. Brown and Smart were part of Boston’s East finals losses in 2017, 2018 and 2020. And this one was slipping away, a frantic Miami run in the final moments casting what looked like a sure-fire Celtics win into serious doubt.

But they would hold on. Jimmy Butler — brilliant again for Miami — missed what would have been a go-ahead 3-pointer with about 17 seconds left, and the Celtics never trailed.

On to San Francisco.

“To get over the hump with this group, it means everything,” Tatum said.

Butler, who willed Miami into Game 7 by scoring 47 points on Friday in Boston, led the Heat with 35 points in what became their season finale. Bam Adebayo added 25 for the Heat, who were down 11 with under 3 minutes to go before trying one last rally.

An 9-0 run, capped by a 3-pointer from Max Strus with 51 seconds left, got the Heat within 98-96. They got no closer. Boston would not be denied, and now is 2-0 in Game 7s in these playoffs after ousting defending champion Milwaukee in the East semis.

“It’s just one of those really tough moments,” Heat coach Erik Spoelstra said. “You can’t prepare for it. … It’s one of the worst feelings into the world to address your locker room after a game like this.”

Kyle Lowry scored 15 for the Heat. Grant Williams finished with 11 for the Celtics.

The notion of Boston being finals bound would have been considered an unlikely proposition two or three months ago.

Ime Udoka’s first season as coach of the Celtics was not without immense challenges. Boston got off to a 2-5 start, lost to Milwaukee on Christmas Day to fall below .500 and was still saddled with a losing record as recently as late January.

Through 50 games, the Celtics were 25-25. No team had that sort of record through 50 games and made the NBA Finals since 1981, when the Houston Rockets started 22-28 and wound up making the title series — where they fell to Boston.

Now the Celtics will look to do the Rockets one better. That Rockets team got into the playoffs at 40-42. This Celtics team roared to life down the stretch and is still roaring.

“Our focus is getting four more,” Udoka said.

They went 26-6 down the stretch of the regular season, and had an uncanny ability to bounce back. Boston is now 13-1 after losses over the last four-plus months.

“The road that we took to get here, not a lot of people believed in us,” Tatum said. “We took the toughest route. It looked out.”

Boston’s lead was 32-17 after one quarter — the largest ever by a road team after 12 minutes of a Game 7, four points bigger than Golden State’s lead over the Los Angeles Lakers back in the 1977 playoffs.

The tone was set, and the lead was never relinquished.

Miami ended the half on an 11-2 run, the burst sparked by 3s from Strus and Butler, then capped by four free throws from Lowry in the final 29 seconds. Butler was up to 24 points at the break and Miami had gotten within 55-49 going into the third.

Miami thought it had gotten within 56-54 when Strus rattled in a corner 3 early in the third. But the Celtics answered with a 9-1 run, which was even worse — the NBA replay center in Secaucus, New Jersey decided that Strus had stepped out of bounds, his 3 came off the board while the game was going, and a 56-54 game became 65-52.

“The Boston Celtics did what they came out here to do in this series,” Butler said.

The Heat kept clawing back, all the way to the end. They just couldn’t catch Boston.

“It’s heartbreaking when it ends like this,” Spoelstra said. “You certainly have to credit the Boston Celtics organization and their team and their coaching staff. … We tip our hats off to them. They are a heck of a basketball team.”

And now, the Celtics are off to the finals.

“Today was the biggest test,” Brown said. “Not just of the year, but of our careers.”

Celtics: Derrick White had to leave early in the fourth quarter because he was bleeding after his head got struck by Adebayo under a basket. … The Celtics became the first team to get three road wins over Miami in the same playoff series.

Heat: Butler was the second NBA player this season to play every second of a game. The other was Oklahoma City’s Georgios Kalaitzakis, in a 50-point loss to the Los Angeles Clippers. … Sixth Man of the Year Tyler Herro returned from a three-game absence because of a groin injury, but went scoreless in seven minutes.

Boston improved to 26-9 in Game 7s. Miami fell to 6-5 in such games, and lost for the first time in five Game 7s at home under Spoelstra.

Miami was a 2.5-point underdog at tipoff according to FanDuel Sportsbook, marking the second time in the last 20 Game 7s — excluding the bubble restart in 2020, when all the games were at Walt Disney World — that the home team wasn’t favored. The other was Houston in the 2018 Western Conference finals; the injury-plagued Rockets were 6.5-point underdogs and lost to Golden State 101-92.