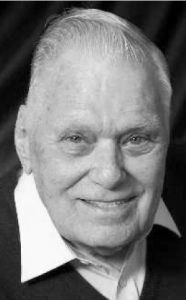 Daniel L. Rappe’, 88, of Sebring, Fla. passed away on Tuesday, May 24, 2022, at his home surrounded by his family. Dan was born on November 21, 1933 in St. Louis, MO, the son of Dallas Lee Rape and Mary C. Stockman Rape. He married Rita Loretto Casey on July 2, 1952. After Rita passed in 2000, he married Mari Ana McAnarney of Girard, IL in 2003. She passed in 2008 . After his retirement from Illinois Consolidated Telephone Company in Taylorville, he and Rita moved to Houston, TX and then later moved to Beaufort, MO to be near family. Dan was a devout Catholic and had been a member of St. Mary’s Catholic Church in Taylorville, St. Michael’s in Houston and Holy Family in (Port Hudson) New Haven, MO. He attended St. Catherine’s in Sebring, FL.

Dan was a life member of the Knights of Columbus, earning the rank of Grand Knight in Taylorville, IL. He served as President of the Lions Club of Beaufort, MO. He was an avid golfer and bowler and a diehard St. Louis Cardinals fan! He enjoyed a good game of poker with his cousins at family reunions. There wasn’t a home project that couldn’t be fixed by his excellent carpentry skills!

A private graveside service at Holy Family Catholic Church Cemetery in (Port Hudson) New Haven, MO will be held at a later date.