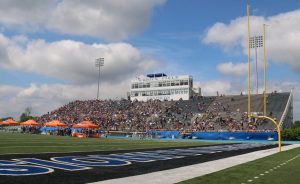 CHARLESTON — The IHSA Track and Field State Finals were held in Charleston spanning most of the day. O’brien Field saw many talented young athletes compete in exciting events such as high jump, discus, short and long distance running. Taylorville High School had five young men qualify and compete for the finals.

First up was Tornado pole vaulter Drake Howard competing in the 2A Pole Vault. The freshman launched himself into a 13 place finish after he cleared 3.95 meters. Howard reached a height of 13.5’ feet (5.5m) the day before, a new personal record for the 2022 season.

Shortly after at 11am the Mens 2A 4×800 m relay got set and took off. Racing for the Tornadoes were sophomore Jack Chesser, junior Owen Morgan, junior Brenton Good and senior Evan Morgan. The quad squad ended strong with a 12 place finish. They received an official time of 8:33.59.

All five Tornadoes set out on Saturday with the humble mindset to just have a good time and enjoy the experience. 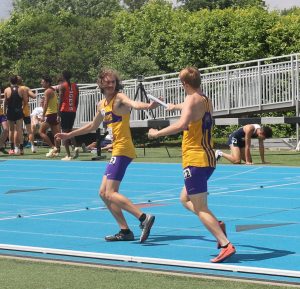 CHARLESTON — Pictured above is the baton exchange between Taylorville’s Brenton Good and Evan Morgan during the final two laps of the Mens 4x800m relay. The Tornadoes finished in 12 place with a final time of 8:33.59.

Pana track and field saw sophomore, Griffin Kimbrel, reach heights of 4.05 meters. This earned him a 5 place finish in the Mens 1A Pole Vault.

Congratulations Taylorville and Pana track and field team on an exceptional 2022! 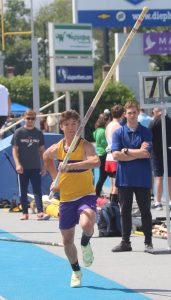 CHARLESTON — Taylorville High School freshman, Drake Howard, prepares his vault of over 13ft! Howard finished with a 13 best in the State of Illinois reaching a height of 3.95m.