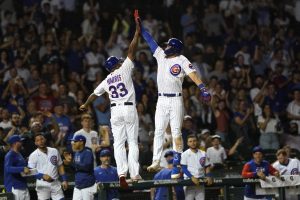 CHICAGO (AP) — Patrick Wisdom had his sights set on something, anything, in the strike zone. He got a pitch up over the middle of the plate and did he ever drill it.

“It feels amazing,” he said. “It feels great, especially to put the team ahead. I thought we did a real good job all night offensively, keeping it close.”

Contreras connected in his second straight game, smacking a solo drive in the first against Milwaukee starter Eric Lauer. Contreras moved ahead of his brother William of the Atlanta Braves for the major league lead among catchers with his eighth home run.

“After my first at-bat, I read that on the scoreboard,” he said. “Inside, it makes me laugh. It makes me proud. We came a long way.”

Contreras also hit an RBI double and scored in a four-run sixth.

Christopher Morel continued a hot start to his career with a walk and a triple, breaking Contreras’ club record by reaching base in his first 14 major-league games.

“Morel brings the energy,” Contreras said. “He brings a lot of things to the table. What I like the most is he’s never mad. He’s never concerned about anything. That’s one thing that lets him play the way he’s playing right now. And he deserves to stay here.”

Mychal Givens (4-0) got four outs, and David Robertson worked the ninth for his seventh save in nine chances.

Former Cub Victor Caratini gave Milwaukee a short-lived 6-3 lead in the sixth with a three-run drive against against reliever Rowan Wick.

The Brewers’ Tyrone Taylor drove in three runs after hitting home runs in both games on Monday. Christian Yelich had two hits and scored twice.

But it was a difficult night for Milwaukee’s outfielders with the heat, humidity and a strong wind, not to mention that brick wall.

“The wind had a big impact on the game, clearly,” manager Craig Counsell said. “I mean, they’re tough plays.”

Brewers: INF Willy Adames will sit out a few minor league rehab games, though he will continue to participate in baseball activities, after experiencing some discomfort in his right quad at Class A Carolina. Tied for second on the Brewers with nine homers, Adames has been sidelined since May 15 because of a sprained left ankle. He missed about two weeks last September because of a strained left quad.

Cubs: OF Seiya Suzuki said through an interpreter he has not noticed any real improvement in his sprained left ring finger and is not sure he’ll be ready when he’s eligible to return from 10-day injured list on June 6. Suzuki was injured Thursday. … The Cubs were awaiting test results on LHP Drew Smyly, who exited Monday’s second game with right oblique soreness. Smyly has been one of the team’s most reliable starters with a 3.80 ERA in nine starts. … Chicago reinstated Nick Madrigal (back) from the 10-day injured list.

The four-game series wraps up, with RHP Jason Alexander making his major league debut for Milwaukee and RHP Kyle Hendricks (2-5, 5.20 ERA) starting for Chicago. The 29-year-old Alexander is 6-2 with a 2.64 ERA in seven starts and nine games for Triple-A Nashville. Hendricks has a 7.36 ERA in his past three outings.