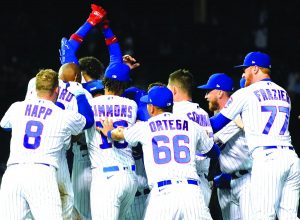 The Chicago Cubs celebrate around Christopher Morel after Morel’s sacrifice fly against the Milwaukee Brewers that scored Jason Heyward with the winning run in the 10th inning of a baseball game Wednesday, June 1, 2022, in Chicago. The Cubs won 4-3.(AP Photo/Charles Rex Arbogast)

He came through in a big moment and set off quite a celebration.

Morel drove in Jason Heyward with a sacrifice fly in the 10th inning, and the Cubs beat the Milwaukee Brewers 4-3 on Wednesday night.

“I love baseball,” Morel said. “God gave me this moment, so I need to give everything every time I go on the field.”

Heyward started on second base and moved up on a groundout by Nick Madrigal. Morel then fouled off two pitches and took a ball before ending it with a fly to left against Hoby Milner (2-1) that was deep enough to bring in the winning run. Teammates mobbed the 22-year-old Dominican in the infield after Heyward scored.

Morel extended his club record by reaching base in his first 15 major league games, when he walked and scored in a two-run first.

“There are guys that were just meant to play baseball,” Cubs starter Kyle Hendricks said. “He’s definitely just a baseball player, a ballplayer. Those are guys you love having around. It feeds to everyone.”

Willson Contreras singled twice, drove in a run and scored one after hitting home runs in his previous two games.

Five relievers combined to shut out Milwaukee the rest of the way, with Mark Leiter Jr. (1-1) getting out of a tough spot in the 10th.

The Brewers had a runner on third with one out in the 10th after Jace Peterson advanced on a wild pitch. He was thrown out trying to score on Kolten Wong’s fielder’s choice grounder to second baseman Madrigal. Tyrone Taylor flied to right, and the Cubs salvaged a four-game split with the NL Central leaders after getting swept in a doubleheader on Monday.

Jason Alexander lasted seven innings after being called up from Triple-A Nashville to make his major league debut. The 29-year-old right-hander gave up three runs — two earned — and seven hits.

Alexander said he felt like he had been through a “30-hour day.” But he settled down after struggling through the first.

“I tried to take some breaths and slow myself down,” he said. “It’s hard to do when you’re out there on the mound but coming into the dugout after the first inning, I was able to calm myself down and then I felt fine the second inning on.”

Cubs: The Cubs placed LHP Drew Smyly on the 15-day injured list Wednesday because of a strained right oblique. The Cubs had no timeline on when Smyly will resume baseball activities, though manager David Ross said he is feeling better than the images taken would indicate. He has been one of Chicago’s most reliable starters, with a 3.80 ERA in nine outings. … The Cubs also activated Heyward from the injured list and right-hander Michael Rucker (left turf toe) from the 15-day IL. OF Nelson Velázquez was optioned to Triple-A Iowa, and RHP Manuel Rodriguez was recalled from Iowa and placed on the 60-day injured list because of a strained right elbow.

Cubs: Chicago opens a five-game, four-day series against St. Louis, with RHP Keegan Thompson (5-0, 1.58) making another spot start for the Cubs and LHP Matthew Liberatore (1-0, 3.72) pitching for the Cardinals. Thompson, who outpitched Johnny Cueto in a win over the crosstown White Sox on Saturday, has made three starts and 11 appearances.