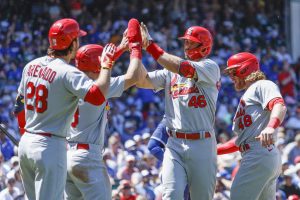 St. Louis Cardinals’ Paul Goldschmidt (46) celebrates with teammates after hitting a three-run home run against the Chicago Cubs during the third inning of a baseball game, Friday, June 3, 2022, in Chicago. (AP Photo/Kamil Krzaczynski)

CHICAGO (AP) — Paul Goldschmidt came in on a tear, then helped set the Cardinals on course toward a lopsided victory. He had plenty of help, too.

Nolan Gorman and Lars Nootbaar also connected as the Cardinals rolled to their fourth win in five games.

Goldschmidt hit a three-run drive in the third for his 12th home run. The six-time All-Star closed in on his career-high 26-game hitting streak with Arizona in 2013 and extended a personal best by reaching base in his 39th consecutive game.

Goldschmidt has 10 homers and 36 RBIs in his last 22 games, a stretch that began May 11,. He has a National League-leading .349 average and 47 RBIs, tied for the NL lead with the Mets’ Pete Alonso.

“It’s fun because of the way he prepares,” manager Oliver Marmol said. “You get rewarded when you’re preparing the way he is — everything that goes into the video work and just his cage routine and just keeping his body fresh.”

Dickerson, batting .183 coming in, sparked a five-run fourth against Marcus Stroman (2-5) when he lined a tiebreaking solo shot to right for his first homer. He combined with Nootbaar for back-to-back solo homers in the against Frank Schwindel, who took the mound in the ninth after starting as the designated hitter.

Gorman launched a long three-run drive in the fourth to make it 9-4. Called up from Triple-A Memphis on May 20, he has three homers and a .361 average through his first 11 major league games.

Miles Mikolas (4-3) allowed four runs and eight hits in five innings. Zack Thompson held the Cubs to one run and three hits the rest of the way, and picked up the save in his major league debut. The 24-year-old left-hander grew up about 65 miles northeast of Indianapolis in Selma, Indiana. He said when he envisioned as a kid getting the final out in the World Series, it was at Wrigley Field. And he got to make his debut at the famed ballpark with his parents on hand.

“I dreamed of this day my whole life and to do it here at Wrigley means a ton,” he said.

Stroman, coming off a string of strong starts, got pounded for a career-high nine runs and 10 hits in four innings. The right-hander had a 1.80 ERA in his previous five outings.

“Command was a little off, but I think they were on today,” Stroman said. “They just took really good swings and I don’t think I had a good game, so just those two combinations.”

Patrick Wisdom hit a three-run homer in the first and RBI single in the seventh. Rookie Christopher Morel extended a club record by reaching base in his first 17 games, when he singled and scored in the third. But the Cubs had their three-game win streak snapped.

Cardinals: 2B Gorman was back in the lineup as the designated hitter after missing the previous three games because of lower back tightness. … OFs Tyler O’Neill (right shoulder impingement) and Dylan Carlson (strained left hamstring) were to begin rehab assignments — O’Neill with Triple-A Memphis and Carlson with Double-A Springfield.

Cubs: C Willson Contreras was out of the lineup after being hit in the left ankle by a pitch Thursday, though he was available off the bench. … RHP Adbert Alzolay (strained right shoulder) was to resume playing catch in Arizona. He is on the 60-day IL.

The five-game, four-day series continues with a split doubleheader. The Cubs plan to have RHP Matt Swarmer (0-0, 1.50) start the first game and righty Caleb Kilian — acquired from San Francisco last season in the deal that sent former MVP Kris Bryant to the Giants — make his debut in the nightcap. The Cardinals will have right-handers Andre Pallante (1-0 1.07) and Johan Oviedo start, though the order was to be determined. Oviedo has not pitched in the majors this season.