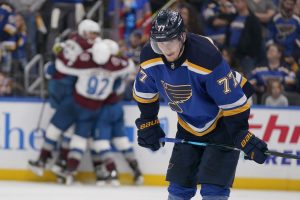 Brayden Schenn described how he came away with broken ribs: an unlucky stick in one of his skates the first time and an elbow and forearm into his back the second time. Along the way, he tore an oblique muscle.

“It’s the reality of the sport,” Schenn said. “I’m not the only guy banged up in the playoffs, so I’ll never use injury as an excuse.”

Schenn and the St. Louis Blues weren’t blaming their myriad injuries for bowing out in six games in the second round to the Western Conference top-seeded Colorado Avalanche, but there’s little doubt they played a role.

Starting goaltender Jordan Binnington was sidelined early in the series with a left knee injury, top-pairing defenseman Torey Krug missed the final nine games of the playoffs with a lower-body injury and the banged-up Blues couldn’t overcome the rest of their bumps and bruises to knock off a tough opponent.

“We went through a ton of injuries and COVID stuff, and we had a lot of guys come up from the minors and play really well for us and provide a lot of energy and spark to our team,” coach Craig Berube told reporters in St. Louis on Tuesday as the Blues conducted end-of-season exit interviews. “We were close with Colorado there. If there was a couple bounces here and there that go a little bit differently, who knows?”

A bounce went against the Blues when journeyman Darren Helm scored the series-clinching goal for Colorado with 5.6 seconds left in Game 6. But after his team fell behind 3-1 in the series, general manager Doug Armstrong was proud players responded and didn’t call it quits in five.

“If there was going to be time to fold the tent and just say, ‘It wasn’t our year,’ they didn’t do that,” Armstrong said. “I thought they played well and played with character. What they did in Game 5 is a foundation builder moving forward.”

So, too, was the play of Binnington, who backstopped the Blues to their first Stanley Cup championship in 2019 when he came out of nowhere as a rookie and lost his job to Ville Husso at the start of the first round against Minnesota.

Binnington went 4-1 in five starts with a .949 save percentage and NHL postseason-best 1.72 goals-against average before getting injured in a collision with Avalanche agitator Nazem Kadri and teammate Calle Rosen in Game 3. Despite breaking his lifelong streak of never leaving a game with injury — and making headlines by throwing a water bottle at Kadri after the game — Binnington again showed he can be a top netminder.

“It’s just how you handle it and just keep trying to put yourself in the best position possible to be successful and contribute to the team,” Binnington said. “I feel I’m in a good spot, and I think it was a great learning experience of a season for me.”

Binnington split goaltending duties all season with Husso, who is a pending free agent coming off a strong regular season and a rough NHL playoff debut. Armstrong spoke with Husso on Tuesday and understands if the 27-year-old Finn wants to test the market.

The Blues’ biggest question moving forward involves the status of Husso and two prominent unrestricted free agents: winger David Perron and defenseman Nick Leddy. Perron, a holdover from the 2019 Cup team, has thrived in his third stint in St. Louis, while Leddy fit in well after joining at the trade deadline in March.

With the salary cap going up slightly to $82.5 million for next season, there’s no reason to let all three walk without trying to keep the band together.

“For all of these guys, it’s a long time between today and July 13 when they’re allowed to hit free agency, so we have some time to work on it,” Armstrong said. “If we can make it work, we will.”

Armstrong isn’t worried about making it work with once-disgruntled winger Vladimir Tarasenko, who remained with the team after asking for a trade last offseason. Like captain Ryan O’Reilly and depth forward Ivan Barbashev, Tarasenko could be a free agent after next season, but Armstrong is focused on the here and now.

“I don’t want to spend all summer saying, ‘Well, what about two years from now?'” he said. “I’m not that bright, guys. I just want to worry on next year. Then, after next year’s over, I’ll worry about the year after.”