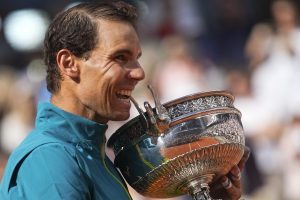 PARIS (AP) — Rafael Nadal beat Casper Ruud 6-3, 6-3, 6-0 to earn his 14th title at Roland Garros and 22nd Grand Slam trophy overall. Both add to records Nadal already owned. And here is a new one: Two days after his 36th birthday, the Spaniard became the oldest champion in French Open history. He now is halfway to a calendar-year Grand Slam for the first time; Nadal won the Australian Open in January. His lead over Roger Federer and Novak Djokovic in the Grand Slam title count is now two — those rivals are both at 20 major championships. Ruud is a 23-year-old Norwegian who was appearing in his first major final.

A GLANCE BACK AT SUNDAY

STAT OF THE DAY

QUOTE OF THE DAY

“I don’t know what can happen in the future, but I’m going to keep fighting to try to keep going.” — Rafael Nadal, who has said chronic pain in his left foot has made him uncertain how long he can avoid retiring.