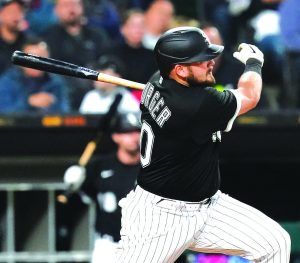 CHICAGO (AP) — Tony Gonsolin couldn’t really control his splitter. His slider wasn’t working for him, and he didn’t command his curve the way he would have liked, either.

One thing he had going for him? His ability to work through it and come away with yet another win.

Gonsolin improved to 7-0, tossing three-hit ball over six innings, and Will Smith and Cody Bellinger homered early to lead the Los Angeles Dodgers to a 4-1 victory over the Chicago White Sox on Wednesday night.

Smith hit a two-run drive in the first inning, and Bellinger made it 3-0 when he connected leading off the second against Johnny Cueto. That was all Gonsolin needed.

Gonsolin struck out five and walked one while lowering his National League-best ERA to 1.58.

The 28-year-old right-hander breezed through the first three innings and got out of a minor spot in the fourth before Jake Burger homered leading off the fifth. The next two batters reached base, but Gonsolin got out of it without allowing another run. He finished strong by retiring all three batters in the sixth, before Roberts went to the bullpen.

“It felt good,” Gonsolin said. “I felt like I had a better feel for my stuff in that inning. I was ready to go out for the seventh.”

Yency Almonte and Brusdar Graterol each worked an inning. Daniel Hudson came on in the ninth for his fifth save in five chances, filling in with closer Craig Kimbrel on paternity leave.

Trea Turner homered leading off the ninth against José Ruiz, and the NL West-leading Dodgers stopped a three-game slide.

The White Sox claimed right-hander Parker Markel off waivers from Oakland and optioned him to Triple-A Charlotte. The 31-year-old Markel made three appearances for the A’s this season and had a 1.89 ERA in 17 relief outings for Triple-A Las Vegas.

White Sox: RHP Lance Lynn (right knee) got tagged for seven runs in three innings for Triple-A Charlotte. La Russa said earlier he hoped Lynn’s third rehab outing for the minor league club would be his final one before joining Chicago’s rotation for the first time this season. A two-time All-Star, Lynn was injured in spring training and had surgery. “If his arm and his leg feel good, he’ll be (back) in the next week,” La Russa said. “If not, we’ll give him another one.”

LHP Tyler Anderson (7-0, 2.59 ERA), who has thrown 26 consecutive scoreless innings, gets the ball for Los Angeles against RHP Dylan Cease (4-2, 3.69) as the three-game series wraps up Thursday. Anderson can become the first eight-game winner in the majors.