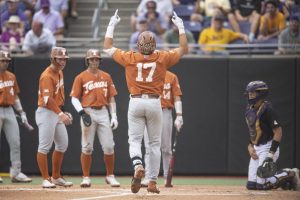 OMAHA, Neb. (AP) — If the College World Series is like the first two rounds of the NCAA baseball tournament, fans in the outfield seats at Charles Schwab Field are going to take home lots of souvenir balls.

The 424 home runs hit in regionals and super regionals already are a tournament record, and at least 14 games remain to be played in the CWS.

Omaha’s cavernous ballpark hasn’t surrendered many homers since it opened in 2011. There were 28 in last year’s CWS, the most since the move from the old Rosenblatt Stadium.

Based on what’s happened across college baseball through super regionals, that number is in jeopardy even though the wind is forecast to blow in most of the CWS.

Texas, Stanford and Arkansas each enter the CWS with at least 100 home runs and Mississippi has 99. A total of 19 Division I teams hit at least 100 this season compared with three last year.

Coaches and officials point to a confluence of factors contributing to the surge.

Players are older and more developed at the plate because the NCAA offered an extra season of eligibility to athletes whose 2020 seasons were impacted by the COVID-19 pandemic.

Also, fewer juniors have left to play professionally the last two years because the Major League Baseball draft was reduced to five rounds in 2020 and now is at 20, half as many as there were from 2012-19.

“I guess the philosophy on that is takes a little bit more time for hitters to mature,” Keilitz said. “I think the swing plane has been a big difference. But the metrics are able to break down the pitching weaknesses… If you watch the games, home runs hit off a guy throwing 95 to 100 miles an hour is absolutely amazing. But they’re on it, and when they hit it, it seems to go a long ways.”

The first two rounds of the tournament produced some eye-popping homer totals. Stanford hit eight in the opener of its super regional with Connecticut — and lost. In regionals, Arkansas had a seven-homer game against Oklahoma State and Auburn hit seven against Southeastern Louisiana.

In Division I, home runs per game per team since the start of the season is 1.02, the highest since the record 1.06 in 1998 and only the second time the figure has been 1.0 or higher.

Division I strikeouts per nine innings are at 8.48 per team, second-highest ever behind last year’s 8.60. Pitching staffs for Mississippi, Notre Dame, Arkansas and Auburn each have strikeout rates of better than 10 per nine innings.

“I think you have some teams that are just, ‘We’re going to strike out a bunch and we’re going to hit home runs and we’re not going to worry about it,’ just like a lot of teams in the big leagues do,” said Auburn hitting coach Gabe Gross, whose seven-year major-league career ended in 2010.

Texas comes in with a program-record 128 homers — 47 more than the previous mark — and has the national home run leader in Ivan Melendez, whose 32 homers are most in Division I since 2003.

Melendez is among six CWS playersin Omaha with at least 20 homers. Last year, there were none.

Longhorns coach David Pierce said his team’s prodigious total surprises him. He noted the school record would have been broken even if Melendez’s homers were subtracted.

Generally speaking, Pierce said, his players’ goal is to hit line drives up the middle or in the gap.

“They don’t work every day for pull-side home runs,” he said. “Our goal is to become good hitters and then the home run comes with it if you’ve got your timing and got some power.”

With the rise of the home run, the amount of small ball being played has dropped. There have been just over 6,300 sacrifice bunts this season, less than half the number in 2012. Ole Miss has five sac bunts and Texas A&M has just six.

Of the eight CWS teams, Oklahoma is the one that most resembles college teams of yesteryear. The Sooners have put down 32 sac bunts and stolen 142 bases, most among CWS teams, and have hit just 70 homers.

“Just creating chaos, that’s what we do,” said OU shortstop Peyton Graham, who has 32 steals. “We’ve embraced it pretty well, and we’re going to keep running with it.”