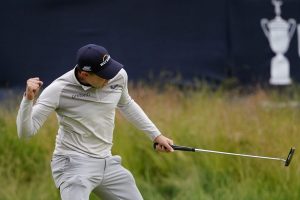 Matthew Fitzpatrick, of England, reacts after a putt on the 13th hole during the final round of the U.S. Open golf tournament at The Country Club, Sunday, June 19, 2022, in Brookline, Mass. (AP Photo/Julio Cortez)

BROOKLINE, Mass. (AP) — The unsettled future of golf was in the surest of hands over the final four tantalizing hours of the U.S. Open.

The sport, almost always at its best when major titles are at stake, went on a wild ride courtesy of Matt Fitzpatrick and Will Zalatoris, two 20-somethings trying to win their first major titles but playing like they’d been doing this for years.

There were ties, lead changes and enough momentum shifts to make an NBA crowd edgy. There was tension. In the end, it was a career-defining shot from a fairway bunker that left Fitzpatrick holding the trophy — and a putt missed by a whisker that left Zalatoris holding his head in his hands in agony after yet another excruciating close call at a major.

“When they show the highlights of future U.S. Opens, that’s one that’s going to be shown because that was just incredible,” Zalatoris said.

He was speaking of the shot Fitzpatrick hit from the fairway bunker on No. 18 while leading by one. It was a 9-iron from 156 yards. The shot elevated out of the sand, and had enough juice to clear the gaping bunker guarding the green. It came to rest 18 feet above the hole.

Fitzpatrick got down in two putts to wrap up his round of 2-under 68 and a tournament of 6-under 274.

But not until Zalatoris’ 14-foot putt to tie stopped a millimeter to the left of the cup — a miss that sent him buckling to the ground and gave him his third second-place finish in only seven starts at the majors — was the tournament over.

With tears welling in his eyes, Fitzpatrick’s caddie, Billy Foster, kissed the 18th flag; it was his first major, too, after four decades in the business.

Then, suddenly, golf’s biggest debate wasn’t about the future of the breakaway LIV Tour, or the stability of the PGA Tour, or how that tour will punish those who have dared to defect. Instead, as Zalatoris suggested, it’s about where Fitzpatrick’s bunker shot might fit in the pantheon of the greatest shots executed under major-championship pressure.

“It’s one of the best shots I ever hit, no doubt about it” Fitzpatrick said.

That the shot, and the day, came at one of golf’s most hallowed shrines only felt right. The Country Club outside of Boston is where Frances Ouimet knocked off one of the game’s greats, Harry Vardon, in a 1913 upset that helped put golf on the map in the United States.

Curtis Strange won the last U.S. Open here in 1988. Justin Leonard made a long putt to lift the U.S. to its Ryder Cup victory here in 1999.

Some thought the U.S. Open had simply outgrown the course, and the property, but the USGA decided to take a chance on the hilly, craggy, windswept layout filled with blind shots and crooked fairways everywhere.

The Country Club delivered. So did Fitzpatrick and Zalatoris, with supporting help from Scottie Scheffler, the top-ranked Masters champion who tied for second with Zalatoris. Most of his best shots over the weekend came on the front nine.

Scheffler was watching near the 18th green when Zalatoris’ birdie putt missed by less than an inch.

“When it was two feet out, I was like, ‘Oh, yeah, that one’s in,’ and for some reason it went off to the left,” Scheffler said. “It’s one of those deals. You’ve got to get the breaks.”

On this day, Fitzpatrick got the biggest breaks. There was none bigger than on the 15th tee box when he and Zalatoris were tied and facing a blind shot over a hill on the 500-yard par-4.

Fitzpatrick hit a massive block; Zalatoris’ miss wasn’t as far off line. But Fitzpatrick’s ball landed in an area trampled down by the fans. Zalatoris was in thick, lush grass. Fitzpatrick made birdie and Zalatoris made bogey. It was a two-shot swing that, ultimately, Zalatoris couldn’t overcome.

“We’re walking down and he goes, ‘I barely miss the fairway and I’ve got a horrible lie and he misses it by 30 yards and he’s OK,'” said Zalatoris’ caddie, Ryan Goble. “But Matt played great. And yeah, it was a great experience. So you just say, ‘Yeah, we’ll get him next time.'”

For Fitzpatrick, this win bookends with his title at the 2013 U.S. Amateur, also at The Country Club. He became the second person to win both the U.S. Open and Amateur at the same place. The other: Jack Nicklaus in 1961 and 1972 at Pebble Beach.

After the victory, Nicklaus called Fitzpatrick to congratulate him on his victory. Fitzpatrick, though, spoke of a different phone call from The Bear — the one he received after his victory at the member-member tournament at Nicklaus’ place in Florida, The Bear’s Club.

“He said “Finally, congratulations for winning in the States,'” Fitzpatrick said.

Nicklaus was razzing him. Before that, all of Fitzpatrick’s seven professional wins had come on the European Tour.

This time, the call from Nicklaus was no joke. Finally, Fitzpatrick has an official win in the United States — and the biggest one at that.