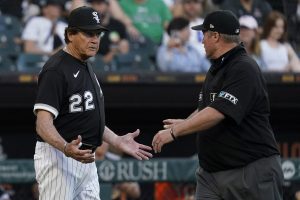 CHICAGO (AP) — Austin Voth and four relievers combined on a one-hitter, Jorge Mateo had a heated exchange with White Sox starter Michael Kopech after getting nailed by a pitch and the Baltimore Orioles beat Chicago 4-1 on Friday night.

Voth, normally a reliever, went three innings in his second start. He gave up an RBI double to Jake Burger in the second for Chicago’s lone hit and issued the only two walks Baltimore allowed. The Orioles struck out eight.

Joey Krehbiel (3-3) worked 2 1/3 perfect innings before Bryan Baker and Cionel Pérez each got four outs. Jorge López pitched the ninth for his 13th save in 15 chances, helping the Orioles win their third straight and fourth in five games.

After outscoring Washington and the White Sox by a combined 11-0 over the previous two games, the Orioles cruised in this one, too.

The only real drama occurred in the second inning, after Kopech (2-4) retired the first two batters. He had a 1-2 count when he nailed Mateo near the left shoulder and upper back with a similar pitch to the one that got Chicago’s Josh Harrison on Thursday.

Mateo had some words for Kopech, though he didn’t think he was hit on purpose. The benches and bullpens emptied, but no punches were thrown. Hyde argued with crew chief Marvin Hudson, and both teams were issued warnings.

Mateo stole second and came around on a single by Richie Martin to make it 2-0.

“I don’t know what happened there, what were they thinking. But I really don’t think it was intentional,” Mateo said through a translator.

Why was he angry?

Kopech insisted he wasn’t trying to hit Mateo, particularly with with two outs and two strikes on a hitter who came into the game with a .198 average.

“Some guys hopped the rail and started talking,” he said. “That’s why things escalated.”

Cedric Mullins led off the game with a bunt single and scored on a wild pitch in the first.

Prized rookie Adley Rutschman doubled in the fourth and scored on a balk. Austin Hays added an RBI double in the eighth to extend the lead to 4-1.

Orioles: Placed struggling rookie RHP Kyle Bradish (right shoulder inflammation) on the 15-day injured list and recalled right-hander Marcos Diplán from Triple-A Norfolk. Hyde said Bradish, who is 1-4 with a 7.38 ERA in 10 starts, felt some soreness following a side session a few days ago. Hyde wasn’t sure what caused the injury, saying “tough to speculate.”

White Sox: 3B Yoán Moncada (right hamstring strain) might be ready to return from the 10-day injured list when he is eligible on Tuesday, manager Tony La Russa said. … CF Luis Robert was back in the lineup after being held out Thursday because of an unspecified injury.

RHP Lance Lynn (1-0, 5.79 ERA) tries to find his rhythm for Chicago in his third start after being sidelined by a knee injury in spring training. RHP Spenser Watkins (0-1, 6.00) gets ball for Baltimore with Bradish sidelined, Hyde said.