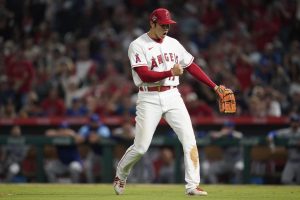 Los Angeles Angels starting pitcher Shohei Ohtani (17) reacts at the end of the top of the eighth inning of a baseball game against the Kansas City Royals in Anaheim, Calif., Wednesday, June 22, 2022. (AP Photo/Ashley Landis)

By The Associated Press undefined

A look at what’s happening around the majors today:

The outing against the Hartford Yard Goats was pushed back a day from Tuesday, but New York manager Buck Showalter says there’s been no setback in Scherzer’s recovery from a strained oblique.

Scherzer will be pitching on seven days of rest after his first rehab start with the Rumble Ponies on June 21.

“There’s no reason to rush it,” Showalter said. “We’re not going to make that mistake.”

A three-time Cy Young Award winner, the 37-year-old Scherzer is 5-1 with a 2.54 ERA in eight starts during his first season with the Mets. He’s been out since May 18.

Angels two-way star Shohei Ohtani is coming off a dominant start as he pitches against the White Sox in Anaheim.

Ohtani struck out a career-high 13 against Kansas City in his last outing, allowing two hits over eight scoreless innings. He has permitted just one run in 20 innings during his last three starts.

Phillies slugger Bryce Harper is set for surgery on his broken left thumb and the club hopes the 2021 NL MVP can play again this season.

Manager Rob Thomson didn’t offer a timetable for Harper’s return on Tuesday, a day before the procedure. Harper’s thumb was broken by a fastball from San Diego’s Blake Snell on Saturday night.

The 29-year-old Harper is hitting .318 with 15 home runs, 48 RBIs and a .985 OPS, and has helped the Phillies recently surge back into playoff contention.

Braves closer Kenley Jansen has been put on the 15-day injured list because of an irregular heartbeat. It’s the latest heart-related issue in the veteran right-hander’s career.

The move was made retroactive to Monday when Jansen felt discomfort, manager Brian Snitker said.

In November 2018, Jansen underwent a cardiac ablation, a procedure to restore normal heart rhythm. He was first diagnosed with irregular heartbeat issues in 2011 and had an ablation the next year.

The 34-year-old Jansen signed a one-year, $16 million deal with the Braves in the offseason. He has gone 4-0 with a 3.58 ERA while converting 20 of 24 save opportunities.